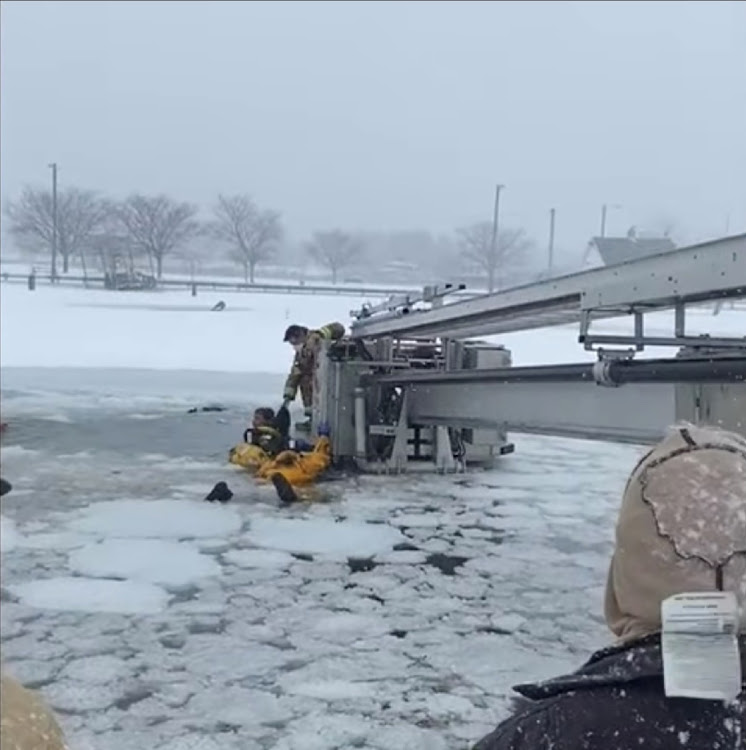 Rescue workers help a person who was in a truck which had fallen into the harbour at Cummings Park, Stamford, Connecticut, US February 1, 2021, in this still image taken from a social media video.
Image: Stamford Fire Department/via REUTERS

US firefighters battled crumbling ice in Long Island Sound to rescue two people trapped after a truck broke through and sank in the frigid waters beneath, authorities said on Tuesday.

▶️ Two people were rescued from a truck sinking in a partially frozen lake by the Stamford Fire Department in Connecticut, Monday.

Firefighters donned cold water rescue suits to free the driver of the truck as it became fully submerged in the icy water.

Social media images of the incident near the Connecticut city of Stamford showed rescuers extending an aerial ladder over the ice to reach the couple in the sinking vehicle.

“The extreme winds, snow and tide continued to move the vehicle and cause it to fill with water,” Matt Palmer, deputy chief of the Stamford Fire Department, said on its website, adding that the mishap came at the peak of a nor'easter storm.

Snow up to 2 feet (61cm) deep was dumped across the US northeast on Monday and Tuesday, killing three people and shutting down transport.

Some of the Stamford rescuers, wearing yellow protective suits, swam through the freezing waters of the Sound to pull the white pickup truck's occupants to safety before it sank completely in the 79-acre (32-hectare) beach-fringing Cummings Park.

“Let's go!” shouted one of the rescue team in the video, while another said, “Give me a hand!” as they pulled one passenger from the water.

A man pulled from the truck's cab through its rear window was taken to hospital, but a woman who had been riding in its rear cargo area declined medical aid, Palmer said in the website statement.

Firefighters and divers stayed behind to help lift the vehicle out of the water.