Severe storms threaten parts of US Southeast with tornadoes possible 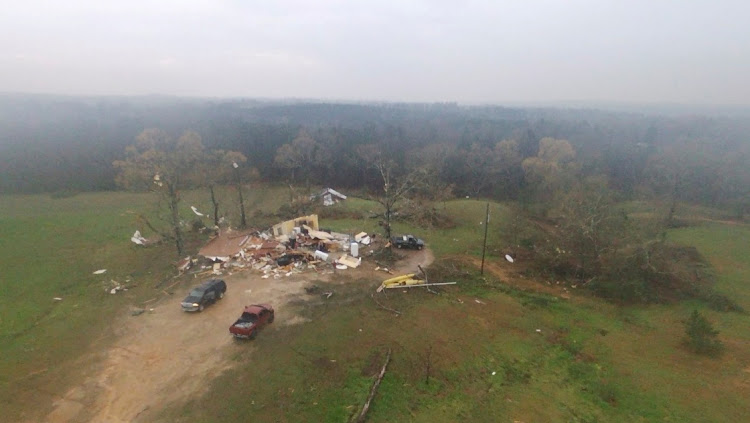 A destroyed house is seen in Chilton County, Alabama, US, March 17, 2021 in this still image obtained from a social media video.
Image: Video taken with a drone. Brad Vance/via REUTERS

A system of severe thunderstorms that spawned tornadoes in Alabama and Mississippi was moving across the US  Southeast on Thursday, threatening northern Florida, southern Georgia and the Carolinas, the US National Weather Service said.

The storms were likely to cover less of the region than earlier forecast but their potential severity remained unchanged, according to forecasters at the NWS Storm Prediction Center in Norman, Oklahoma.

“It doesn't look to be necessarily as widespread as we thought yesterday,” Jeremy Grams, lead forecaster at the centre, told Reuters on Thursday.

“There is still at least a threat for ... at least a couple — if not a few — strong tornadoes in that area from eastern Georgia up through eastern North Carolina.”

Isolated severe storms are also possible from southern Ohio into the central Appalachians, according to the NWS.

In South Carolina, the service posted a warning on Twitter about the possibility of a “strong tornado” and urged residents to be prepared to seek a safe place.

As of Thursday morning, the Storm Prediction Center had fielded 152 reports of severe weather, including 24 reports of tornadoes, some of which led to serious damage of homes and businesses in Alabama and Mississippi, according to media reports.

“Probably the worst part of yesterday was across Alabama, that has all shifted to the east today,” Grams said.

More than 40 million Americans were at risk of severe weather on Thursday from Florida to Virginia and including a small area that extends westward into the Ohio valley, he said.