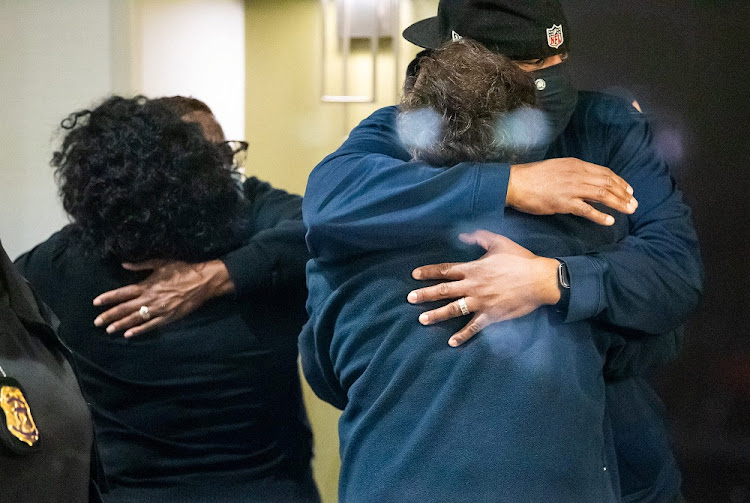 People embrace after learning that their loved one was safe after a mass casualty shooting at the FedEx facility in Indianapolis, Indiana, U.S. April 16, 2021.
Image: Mykal McEldowney/IndyStar/USA Today Network via REUTERS.

Authorities said on Friday that it was still too early to know what motivated a gunman who killed eight employees at a FedEx facility in Indianapolis and wounded several others before taking his own life.

The shooting - the latest in a spate of mass shootings across the United States - unfolded at a FedEx operations center near the Indianapolis International Airport after 11 p.m. local time on Thursday night, police said.

The incident, which lasted only a couple of minutes, was already over by the time police responded to the scene, Craig McCartt, the Indianapolis police department's deputy chief, told a news briefing on Friday. Witnesses described a chaotic scene, as the gunman opened fire in the parking lot before entering the facility and continuing to fire.

Officers found the suspect dead inside the facility of an apparent self-inflicted gunshot wound, along with four victims. The other four victims were outside.

"Last night, Indianapolis was revisited by the scourge of gun violence that has killed far too many in our community and our country," Mayor Joe Hogsett said at the briefing.

The massacre is the most recent in a series of U.S. mass shootings that has again pushed the issue of gun violence to the political foreground.

Indianapolis alone has seen two mass shootings this year, including a January incident in which police say a teenager shot and killed four family members and a pregnant woman.

President Joe Biden was expected to address the shooting later on Friday.

Earlier this month, Biden announced limited measures to tackle gun violence that included a crackdown on self-assembled "ghost guns." He has also called on Congress to enact more stringent gun control measures, but such limits face fierce opposition from many Republicans.

FBI Indianapolis Special Agent in Charge Paul Keenan said it would be "premature to speculate" on the gunman's motive. Authorities have not yet publicly named the suspect or any victims.

Federal investigators are assisting police in a search of the suspect's home and helping to conduct witness interviews, Keenan said.

A FedEx employee, Levi Miller, told NBC's "Today Show" he saw a "hooded figure" holding what appeared to be an AR-style semi-automatic rifle who shouted and opened fire outside the facility.

"I thought he saw me, and so I immediately ducked for cover," he said.

Another worker at the air freight facility told local television station WRTV that he was eating when he heard what sounded like "two loud metal clangs" followed by more shots.

"Somebody went behind their car to the trunk and then got another gun," he said. "Then I saw one body on the floor."

Five people were taken to hospitals with gunshot wounds, including one in critical condition, police said. Two more were treated at the facility itself by medical staff and released.

Hours after the shooting, employees' family members, friends and colleagues gathered at a "family unification center" that authorities set up at a nearby hotel. Some relatives expressed frustration that they were unable to reach workers at the site, where many employees are barred from having their mobile phones by a company policy intended to avoid distractions.

In a message to staff, FedEx Chief Executive Officer Frederick Smith said that the eight victims were all employees.

"First and foremost, I want to express my deepest sympathies to the families, friends, and co-workers of those team members," said Smith, who added that the company is cooperating with investigators.

"This is another heartbreaking day and I'm shaken by the mass shooting at the FedEx Ground facility in Indianapolis," Holcomb said in a statement. "In times like this, words like justice and sorrow fall short in response for those senselessly taken."

Friday marked the 14th anniversary of the deadliest school shooting in U.S. history at Virginia Tech, which saw 32 people killed.

More recently, eight people were shot to death at three day spas in the Atlanta area in mid-March, raising fears that the gunman had targeted Asian Americans amid a rise in hate crimes. Days later, a gunman killed 10 people at a Colorado grocery store.

Chicago officials released to the public on Thursday a graphic body-camera video showing a police officer shooting and killing a 13-year-old boy ...
News
2 months ago

Robber sentenced for accomplices' deaths in shoot-out with Durban homeowners

A 33-year-old e-hailing taxi driver was sentenced to 20 years behind bars for his role in a robbery that led to the death of two of his accomplices ...
News
2 months ago

The mass shooter who killed 51 people in New Zealand in 2019 has launched a legal challenge seeking a review of his prison conditions and his status ...
News
2 months ago