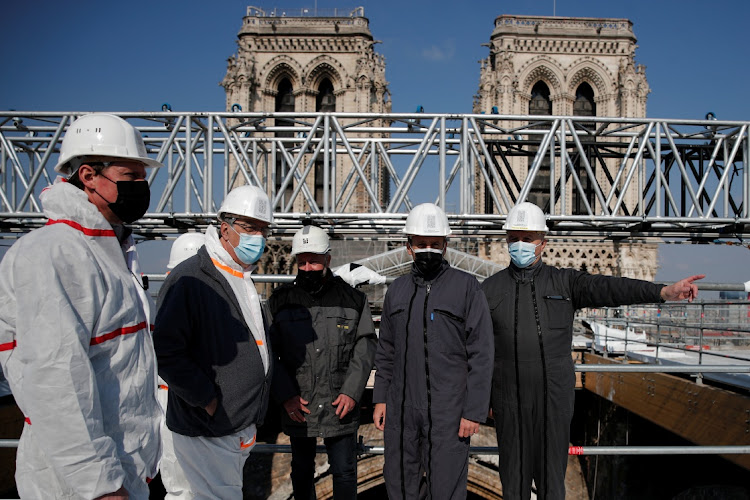 President Emmanuel Macron on Thursday praised the painstaking efforts to rebuild Notre-Dame de Paris, two years after flames ripped through the cathedral's centuries-old attic and sent its spire crashing through the vaults below.

In the hours after the blaze, Macron told a distraught nation that the cathedral, which dates back to the 12th century, would be restored and later promised it would be reopened to worshippers by 2024.

More than 700 days after workers scrambled to shore up Notre-Dame's flying buttresses, save its 13th-century stained-glass rose windows and install movement sensors, the effort to make the site secure ahead of restoration is almost complete.

From a rooftop platform, the president, dressed in overalls and a safety helmet, peered down into the cathedral's damaged transept and thanked workers on the site.

“Everyone remembers where they were two years ago, the emotion of all Catholics, of all Parisians and all French people,” Macron told a group of workers with the Paris skyline behind him.

“We're all impressed with what we see, with the work that has been achieved in two years. Bravo and thank you.”

The first phase of the salvage operation was complicated by the need to cut up a 200-tonne mass of twisted metal left after the fire consumed scaffolding that had been erected around the wood-and-lead spire at the time of the blaze.

Work was also temporarily halted because of worries over lead contamination and slowed at times by the coronavirus pandemic.

Technicians still have to reinforce some of the vaults closest to those destroyed with wooden arch-shaped frames that are lifted into place by crane, and extend a tarpaulin roof over the transept to protect the restoration work once it begins.

The cathedral will only be declared out of danger once the phase to secure the site is complete, but all the indications were positive, said Jeremie Patrier-Leitus, a spokesperson for the public body overseeing the restoration.

“The cathedral hasn't moved since the fire, it's holding up.”

The cathedral will be restored to its original design, including the 96-metre (315-feet) spire designed by architect Eugene Viollet-le-Duc and added in the mid-1800s. The felling of oaks for the new spire's frame has begun.

Financing for the restoration was not a concern yet, said General Jean-Louis Georgelin, the former army chief of staff named by Macron to head the renovation. Some 834 million euros in donations flooded in from billionaire tycoons and households in France and abroad in the fire's aftermath.

“We will need all these donations to complete the necessary work. We need people to keep giving money,” Georgelin told France Inter radio.

Tearful Parisians and stunned tourists gazed in disbelief while the inferno raged at the cathedral, which marks the very centre of Paris. Some sang liturgical music in harmonies late into the night as they stood vigil, while others prayed.

Horror and sadness as Notre Dame burns in Paris