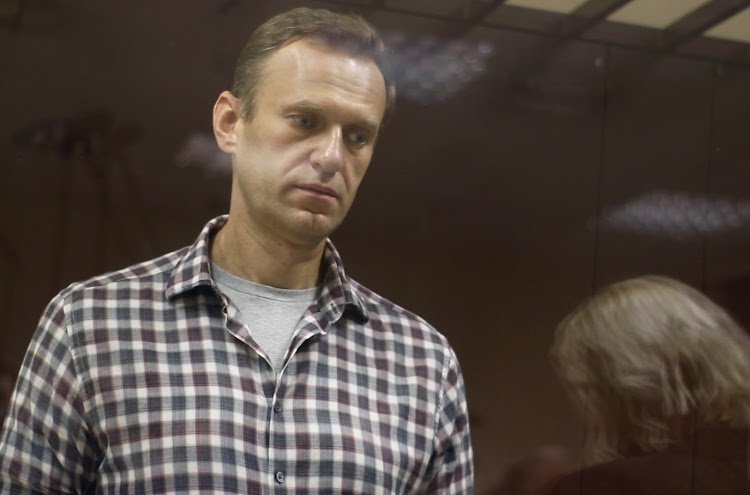 Navalny said he was still demanding to be seen by a doctor of his own choosing, the original trigger for his hunger strike, and that he was losing feeling in parts of his legs and arms.
Image: Reuters

Jailed Kremlin critic Alexei Navalny said on Friday he would start gradually ending a hunger strike after getting medical care, even as the political prospects for him and his movement darkened.

Sounding upbeat and emotional, the 44-year-old opposition politician said in an Instagram post that his hunger strike and the support he had received in Russia and the West had delivered "huge progress".

The worsening health of Navalny, President Vladimir Putin's most prominent domestic opponent, and the authorities' initial failure to give him the treatment he demanded had triggered a Western diplomatic offensive designed to cajole Moscow to make concessions.

In the Instagram post published by his lawyers, Navalny said he was still demanding to be seen by a doctor of his own choosing, the original trigger for his hunger strike, and that he was losing feeling in parts of his legs and arms.

He said, however, he had twice been seen by civilian doctors and undergone tests. It would take 24 days to unwind the hunger strike which he launched on March 31, he added.

"Considering the progress and all the circumstances, I am beginning to come out of the hunger strike," he wrote.

Supporters and friends reacted with relief, but sources close to the Kremlin and some activists said his political movement - the Anti-Corruption Foundation (FBK) - was on the verge of receiving a potential body blow from the authorities.

Jailed Russian opposition politician Alexei Navalny said on Friday he would begin gradually ending a hunger strike he had called to demand proper ...
News
1 year ago

A Russian court is expected to rule next week on a request from a Moscow prosecutor to officially outlaw the FBK and Navalny's regional headquarters - the backbone of his movement - on the grounds that it is an extremist group.

Such a ruling, if it happens, would give the authorities the legal power to arrest and jail his supporters simply for being activists.

A source close to the Kremlin predicted Navalny's allies would struggle after the ruling.

"It will be their end as an agent of influence," said the source. "They will be forced to come up with new ways of communicating with their supporters ... They'll need time to gain momentum again."

The same source said the authorities were ready to jail some of Navalny's allies whom they regarded as the most radical.

"Only a few are likely to go to jail, the real hotheads," the source said. "The authorities don't want to look like cannibals."

Leonid Volkov, one of Navalny's closest allies, declined to comment as did other aides.

"The protest movement in Russia will be destroyed and beheaded to a large degree but it won't disappear," said Abbas Gallyamov, a former Kremlin speech writer."

"The people who don't like Putin will hardly start to like him after this. On the contrary their anger will grow but their outbursts will be more spontaneous and less organised," he said.

Tens of thousands of people took to the streets across Russia on Wednesday in support of Navalny and more than 1,800 were detained.

Pavel Chikov, a lawyer and rights activist predicted that next week's ruling may force Navalny supporters to move more of their activities online.

But he said many disgruntled Russians were not Navalny supporters and that some would continue to protest when they felt like it.

"Their habit of taking to the streets will not go away," Chikov said.

Navalny was jailed for 2-1/2 years in February for parole violations that he and his supporters said were fabricated.

He launched his hunger strike after saying that prison authorities had refused him access to a doctor of his choosing despite his complaints of acute back and leg pain.

Authorities in the IK-2 correctional facility about 100 km (60 miles) east of Moscow where Navalny is serving out his sentence said they had offered him prison medical care but that he had refused.

His supporters said he had refused it because it was substandard and, in some cases, outdated and dangerous.

Navalny survived a poison attack with a nerve agent last year, which Russia denied carrying out.

Russia arrests over 1,400 at rallies for hunger-striking Navalny

Police rounded up more than 1,400 protesters on Wednesday as Russians in dozens of cities took part in rallies organised by allies of hunger-striking ...
News
1 year ago