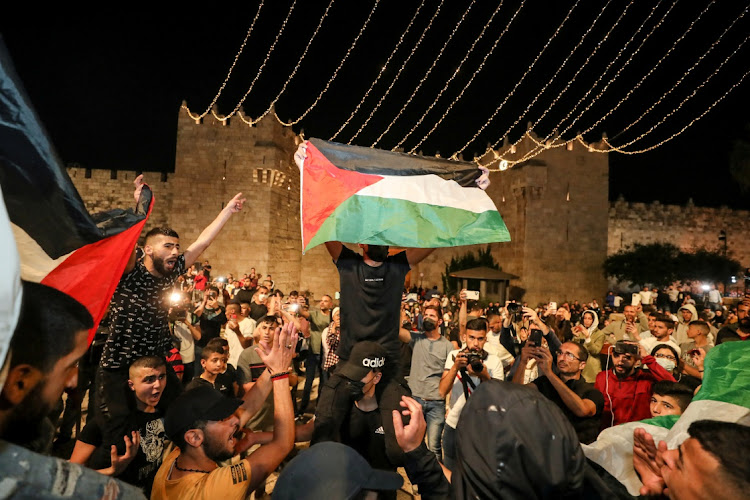 Palestinians wave flags and celebrate outside Damascus Gate after barriers that were put up by Israeli police are removed, allowing them to access the main square that has been the focus of a week of clashes around Jerusalem's Old City April 25, 2021.
Image: REUTERS/Ammar Awad

Palestinians gathered in celebration outside Jerusalem's Damascus Gate on Sunday night after barriers put up by Israeli police were removed, allowing them access to a square that became the focus of nightly Ramadan clashes.

Thousands filled the East Jerusalem plaza late on Sunday, some waving Palestinian flags, after police permitted them access to the tiered entrance to Jerusalem's Old City that is a popular night-time meeting place during the Muslim holy month.

Scuffles broke out, however, as Israeli police waded into the crowd to confiscate the flags.

Amid the celebratory scenes that went on into Monday morning, Ahmad Tibi, a lawmaker from Israel's Arab minority, criticised what he called the “mistaken” decision to put the metal barricades up in the first place.

“The decision to reopen is right,” he told Reuters outside Damascus Gate. “It is a good decision in the right direction, but they should stop attacking Palestinians.”

The clashes followed the start of Ramadan on April 13 and laid bare simmering tensions in the holy city.

There were confrontations between stone-throwing youths and police in riot gear trying to disperse them, using horses and vehicles spraying foul-smelling skunk water.

The anger spilled over into the occupied West Bank, which saw protests in solidarity with East Jerusalemites, and dozens of rockets fired by Palestinian militant groups from Gaza into Israel.

Violence peaked on Thursday when Palestinian medics said 100 people were injured as Israeli police arrested more than 50 protesters, even as hundreds of ultranationalist Israelis marched through central Jerusalem towards Damascus Gate chanting: “Death to Arabs”.

It subsided over the weekend, and videos on Sunday shared on social media showed Palestinians taking down the barriers after evening Ramadan prayers, though Israeli police said they ordered their removal in light of the “unprecedented events” of recent days. 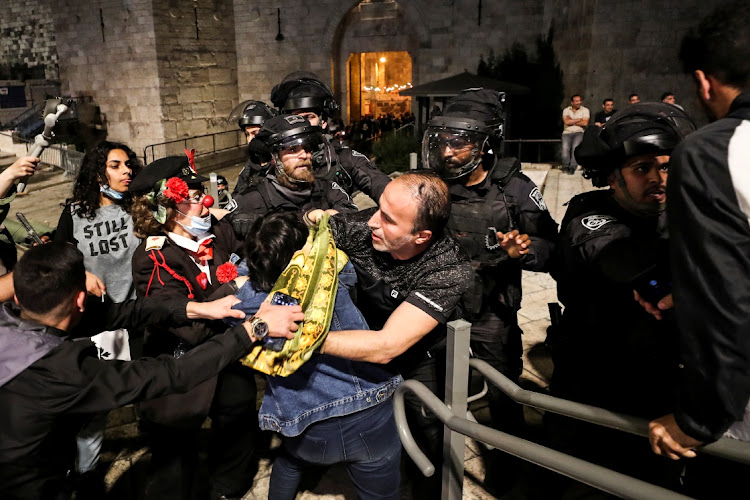 Israeli police and protesters scuffle outside Damascus Gate after barriers that were put up by Israeli police are removed, allowing access to the main square that has been the focus of a week of clashes around Jerusalem's Old City April 25, 2021.
Image: REUTERS/Ammar Awad

“It was ordered to remove the barriers after consultations with religious authorities, local leaders and shop owners,” an Israeli Police spokesperson told Reuters. He said the decision was taken “to ensure peace and security for all” in Jerusalem.

Measures to ease the tensions came after international appeals for calm, amid fears that the clashes could escalate out of control given Jerusalem's status as a key fault line in the Israeli-Palestinian conflict.

The immediate cause of the dispute was Palestinian anger at an Israeli police decision to prevent crowds from gathering outside the gate, a historic landmark.

Israel captured and occupied East Jerusalem in a 1967 war, later annexing it unilaterally. The Israeli government regards the whole city as the eternal and indivisible capital of the country, though that is not recognised internationally.

Palestinians feel equally strongly, saying that East Jerusalem must be the capital of a future Palestinian state.

Hussein Hamayel, a spokesperson for Palestinian President Mahmoud Abbas' Fatah movement, said the outcome “proved the strength and composure of our great people” against Israel, its military and settlers.

In Gaza, Hamas spokesperson Hazem Qassem also hailed it as a victory. “The youth of Jerusalem forced the occupation to remove the checkpoints,” Qassem told Reuters.

The Israeli military said late on Sunday that Palestinian militants had fired another rocket towards Israel, but that it fell short and exploded in Gaza.

Israel said that because of the continuing rocket fire, it would restrict the fishing zone in the Gaza Strip to 9 nautical miles from 15 starting at 6am and until further notice.

The anti-Israeli documentary, 'Roadmap to Apartheid', will finally be screened at a Cape Town cinema after a nine-year legal battle.
News
1 year ago