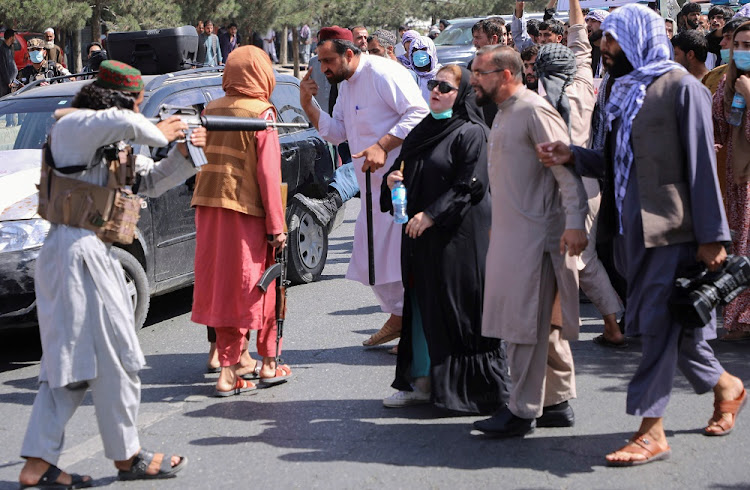 A member of the Taliban armed forces points his gun at Afghan protesters shouting slogans during an anti-Pakistan protest near the Pakistan embassy in Kabul, Afghanistan, on September 7 2021.
Image: REUTERS/Stringer

The Taliban named Mullah Hassan Akhund, an associate of the movement's late founder Mullah Omar, as the head of Afghanistan's new government on Tuesday, with Mullah Abul Ghani Baradar, head of the movement's political office, as deputy.

Sarajuddin Haqqani, son of the founder of the Haqqani network, designated as a terrorist organisation by the US, will be the new interior minister, the Taliban's main spokesperson Zabihullah Mujahid told a news conference in Kabul.

Mullah Mohammad Yaqoob, son of Mullah Omar, has been named as defence minister.

All the appointments are in an acting capacity, Mujahid told a news conference in Kabul.

The Taliban claimed victory on Monday in the last part of Afghanistan still holding out against their rule, declaring that the capture of the ...
News
3 months ago

The Taliban said on Sunday their forces had fought their way into the provincial capital of Panjshir, the valley where opposition forces have been ...
News
3 months ago

Taliban and opposition forces battled on Saturday to control the Panjshir Valley north of Kabul, the last Afghan province holding out against the ...
News
3 months ago