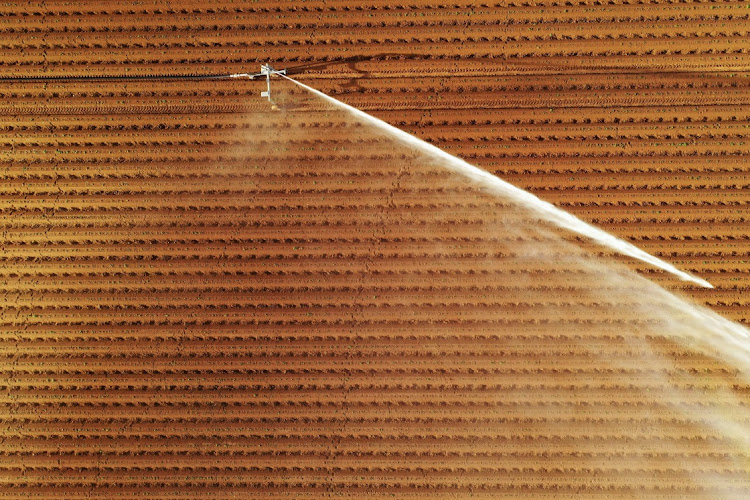 A field of potatoes is irrigated after the authorities announced a drought risk for the summer, in Havrincourt, France, May 18, 2022.
Image: REUTERS/Pascal Rossignol

Extremely dry weather has caused severe damage to grain crops in some parts of France and substantial rain will be needed by early June to allow those in large producing regions to pull through, a technical institute said on Thursday.

France, the European Union's largest grain producer, has seen little rain in the past months and is experiencing record temperatures for May, a crucial month for winter crop development, prompting wheat prices to soar in recent weeks as concerns of tight global supplies worsened.

"There will be two situations coexisting in France. First the shallow to medium soils where very clearly the crops have already suffered and will not recover and yields will be very poor," Jean-Charles Deswarte, agronomist at crop institute Arvalis, told Reuters.

"Then you have irrigated situations or with very deep soils where for the moment we continue to think that in the end it can go quite well because, if not excessive, dry weather leads to less diseases and beneficial radiation," he added.

Regions with deep soils are mostly located in northern France and account for about half of the country's output.

However, Deswarte noted that "substantial" rain of between 30-50 millimeters (1.2-2.0 inches) by early June would be needed in these regions and that water restrictions that limit irrigation were rising in France.

It usually rains about 200 millimeters between March and June but there were only 50-60 millimeters so far, he said.

"We must be frank, today with the hydrological forecasts that Meteo France produces for the end of May and early of June, there will be a whole part of plots in France which will in any case be permanently affected by then," Deswarte said.

In regions with superficial to mid-level soils, about a third of the crop potential had already been lost, with damage on some parcels reaching 50%, Deswarte said.

It was too early to give a country-wide forecast, he added.

For spring crops, which are at an early stage of development, water use would be crucial, he said.

"Whether it be for corn, sunflower or sorghum, when there is no water there is no plant," he said, noting that many farmers were using their irrigation quota to "save their wheat crops".

The French environment ministry on Thursday warned that more water restrictions would be imposed in the event of foreseeable water shortages.