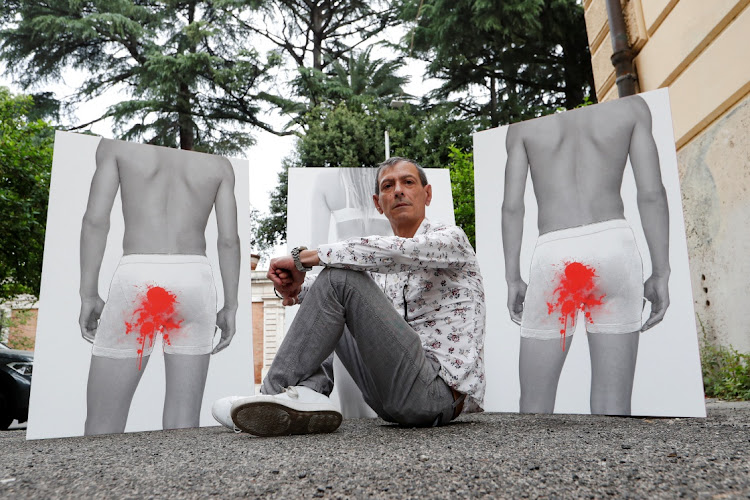 Francesco Zanardi, 51, a victim of church sexual abuse, and founder and president of Rete l'Abuso (The Abuse Network), poses for a photograph after holding a flash mob outside the Vatican embassy to Italy, calling for an investigation into sexual abuse in the Italian Catholic Church, in Rome, Italy, May 27, 2022.
Image: REUTERS/Remo Casilli

Anti-abuse activists on Friday demonstrated near the Vatican embassy to Italy to demand action into sexual abuse in the Italian Catholic Church, amid ongoing discussion on how such an investigation should be organised.

A small group of protesters approached the Apostolic Nunciature building, near the centre of Rome, carrying boards with pictures of men and women with bloodstained underwear. One of the protesters had a nun's veil on her head.

They said they took inspiration from a protest staged in the Estonian capital Tallinn in April which sought to draw attention to alleged violence committed by invading Russian forces against women in Ukraine. In that protest demonstrators applied fake blood to their underwear and down their legs.

“I have unfortunately experienced paedophilia and every victim knows they cannot recover from what they have been through, but the greatest wish is that other children do not suffer what we have experienced,” said activist Francesco Zanardi.

Zanardi, 51, runs Rete l'Abuso (The Abuse Network), and in February formed a consortium called “Beyond the Great Silence” along with eight other groups to put pressure on Italy's Church to agree to an impartial investigation.

Italian bishops are divided over whether an eventual full-scale investigation should be internal, using existing resources such as diocesan anti-abuse committees, or be conducted by an outside group, potentially comprising academics, lawyers and abuse experts.

They are also divided over whether it should be confined to the recent past or go back decades.

“A 'super partes' (impartial) body is needed, which in this case is the state, to manage the situation, but the state has been the only major absent party in this whole issue for years now,” Zanardi said.