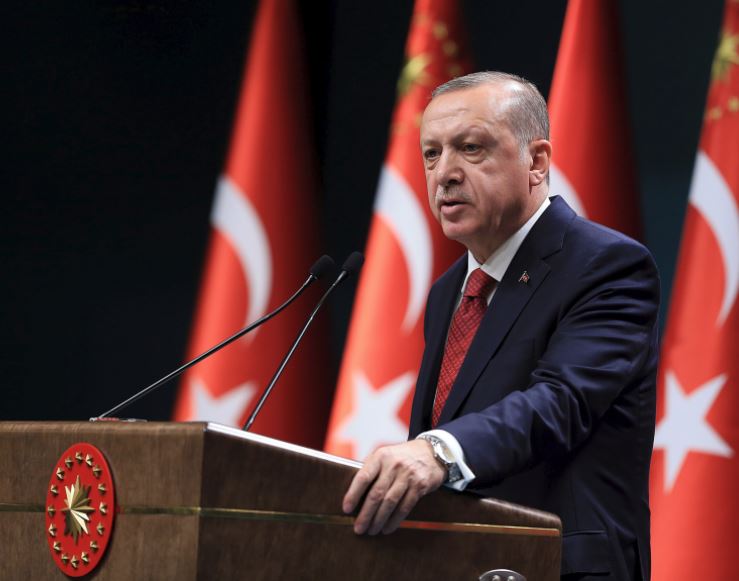 During shifts as a factory interpreter, Syrian refugee Khalil Al-Hossein nervously tracks his application for Turkish citizenship. Just over the nearby international frontier, meanwhile, Turkey is accelerating its construction of housing, schools and hospitals on the plains of northern Syria hoping to lure exiles like him back home.

The contrasting priorities reflect two sides of a migration crisis a decade in the making that’s approaching a pivotal juncture.

Turkey’s hosting of 3.7 million Syrians who fled their country’s war is stirring political tensions as rocketing prices and job insecurity take a toll just over a year before scheduled elections, ratcheting up pressure on President Recep Tayyip Erdogan.

He has announced a plan to return one million Syrians to a Turkish-controlled strip of territory, while breaking with some nationalist politicians to insist the repatriation program will be voluntary. 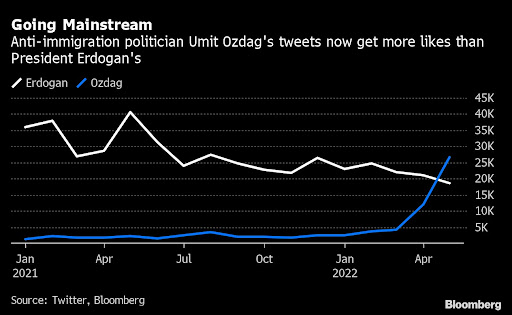 The hosting of millions of migrants has become a major political issue for the president ahead of 2023 elections.
Image: Bloomberg

The proposal could help dial down growing resentment among Turks and resettle largely Arab refugees in an area Ankara wants to keep free of the armed Syrian Kurdish group at the heart of the current tussle over expanding NATO.

It’s a program that Al-Hossein, an ethnic Turkmen from Syria’s Aleppo, hopes to have no part in. Turkey has granted citizenship to more than 200,000 Syrian refugees, cherry picking highly skilled migrants such as doctors and engineers or those with ethnic bonds to the country. But many more have little interest in returning to a still-fractured Syria where there’s the potential for future explosions of violence despite President Bashar al-Assad’s regime consolidating its power.

“I will never go back unless the Turkish state, Turkish people, forcefully send me across the border,” said Al-Hossein, 26, in Gaziantep province. “There’s no life left for me there.”

Under a 2016 agreement, the European Union paid Turkey billions of dollars to host desperate Syrians fleeing war and looking to settle in Europe, where migrants were fanning a populist surge.

The deal came under intense pressure at times as Erdogan’s government tussled with the EU over its terms and other issues. But by and large, the president’s largely rural and conservative supporters went along with the policy as a moral and religious duty.

That’s changing. Fueled by increasingly dehumanizing media coverage, anti-refugee sentiment has gained ground as the struggling economy leaves poorer Turks unable to pay their bills and is now expressed by voters across the spectrum of Turkish politics, from ruling party to opposition.

Umit Ozdag’s Twitter account is one measure of the mood, as the anti-immigration firebrand’s tweets regularly gather more attention than those sent by Erdogan. Ozdag holds his Zafer Party’s only seat in parliament yet he’s commanding outsized media attention.

“We will send them away to secure our home and revive the economy,” he said last month in an interview in his office, decorated with maps showing the density of refugees across the country. “Turkey will cease to be a route to Europe for refugees from the Middle East, Asia and Africa and use its resources for the good of its own citizens.”

Turks complain of overcrowded classrooms and longer waits at hospitals -- where refugees receive free medical treatment -- as well as increased competition for jobs and housing that, government critics say, is lowering salaries among informal workers and pushing up some rents.

The government says it has spent about $100 billion on housing, medical care and schooling for refugees since the start of Syria’s war.

It’s an incendiary mix at a time when a weaker currency, partly untethered by Erdogan’s unorthodox monetary policy, and soaring energy prices have helped push inflation to a two-decade high around 70%.

Activists and some officials have pushed back, highlighting the positive economic contribution made by many refugees.

“They’ve strengthened our labor gap in construction, agriculture and husbandry, they are working in sectors that our own children do not want to work,” Gokce Ok, who helps run refugee rehabilitation programs at Turkey’s migration authority, told TGRT television.

“If we want cheese and olives at breakfast, someone will feed the animals, pick the olives,” Ok said. “They are heavily employed in Gaziantep’s industrial zone in textiles, shoe-making, and if they’re gone, our economy would suffer.”

The government points to the 750,000 Syrian children born in Turkey as a future boon for an ageing population. But it’s also pushing ahead with the resettlement plan.

Turkey’s disaster management authority along with local Syrian authorities and charities has built row upon row of cinderblock housing as well as key infrastructure across the border.

Erdogan said 57,000 homes out of an initial 100,000-target had been finished, with plans for another 200,000 in 13 localities, including Jarablus, Al-Bab and Tal Abyad, names synonymous with years of war and jihadist insurgency where fighting still sporadically erupts.

Filling the houses will prove difficult, predicts Emre Peker, Europe director for Eurasia Group, given the deep roots put down in Turkey by many refugees and the lack of incentives to return home. Interior Minister Suleyman Soylu says 400 to 500 Syrians are opting to return each week.

Immigration “won’t be a deciding factor in the polls,” Peker said. But it could “nevertheless chip away at Erdogan’s support, given across the board animosity against migrants.”

For the likes of Mohammed Abud, a 36-year-old ironsmith from Aleppo living in Ankara, whether to stay or go is an easy question to answer.

“I miss my homeland but I can’t go now, I would not feel safe,” he said. “I am happy to raise my children in an Islamic country in peace.”