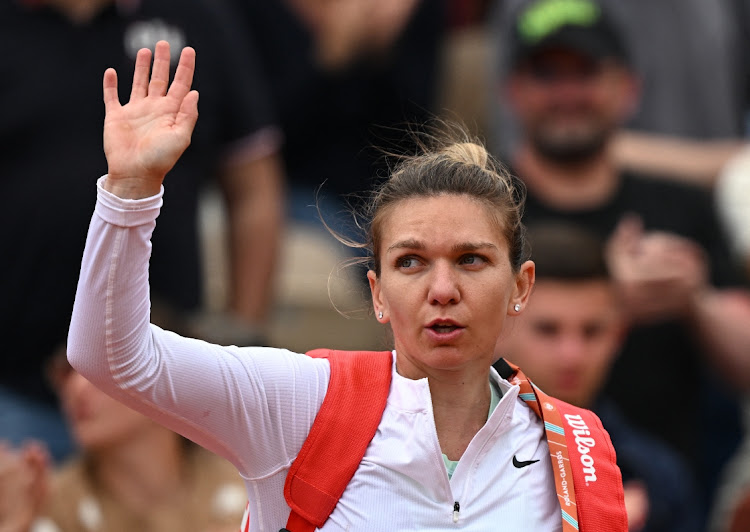 Simona Halep said she would have to learn to put less pressure on herself after suffering a panic attack during her second round loss at the French Open on Thursday.

The former world number one and 2018 French Open champion called for the doctor during the third set of her loss to Chinese teenager Zheng Qinwen on Court Simonne Mathieu.

"It was a panic attack. It happened," she told reporters with a smile afterwards.

"I didn't know how to handle it because I don't have it often. I don't really know why it happened because I was leading the match, I was playing well.

"I lost it. I couldn't focus. After the match was pretty tough. But now I'm good. I'm recovered, and I will learn from this episode. Nothing like dangerous, in my opinion."

The mental health of top women athletes has been brought into focus over the past year after Naomi Osaka and American gymnast Simone Biles spoke out about their struggles.

Halep, who lost three Grand Slam finals before winning majors at Roland Garros and Wimbledon, said last year she sometimes struggled to handle the pressure of being an elite athlete.

French wildcard Leolia Jeanjean caused a major upset at the French Open when she destroyed former world number one Karolina Pliskova 6-2 6-2 in the ...
Sport
1 month ago

The 30-year-old Romanian said she had been given the all clear by doctors after her panic attack and was determined to learn from the experience.

"It's just a tennis match so I have to be a bit more relaxed. I probably put pressure on myself too much because I really wanted to do well,.

"I felt good. I practiced. I worked hard. But I probably I got a bit of panic during that thinking, overthinking.

"It happened. I have to accept it. It's something normal that everybody has. I will be better next time for sure. I don't have these things so it was new for me."

Wimbledon will drop the titles "Miss" and "Mrs" before the names of female winners on its honour roll to match the men's boards in an attempt to modernise the tournament, The Times newspaper reported.

The All England Lawn Tennis Club has traditionally used the titles only for women. Ash Barty, last year's champion, was refereed to as "Miss A Barty" whereas men's winner Novak Djokovic went on the board as "N Djokovic".

In 2019, organisers did away with the use of honorifics when announcing scores in women's matches but the events continue to be referred to as "gentlemen's singles" and "ladies' singles".

The change will also put an end to married women being identified by both the initials and surnames of their husbands.

The grass court major, which has been stripped of ranking points by the ATP and WTA over its decision to ban Russian and Belarusian players due to Moscow's invasion of Ukraine, starts on June 27.

Barbora Krejcikova's French Open title defence ended in the opening round on Monday as local hope Diane Parry was roared to a 1-6 6-2 6-3 victory ...
Sport
1 month ago