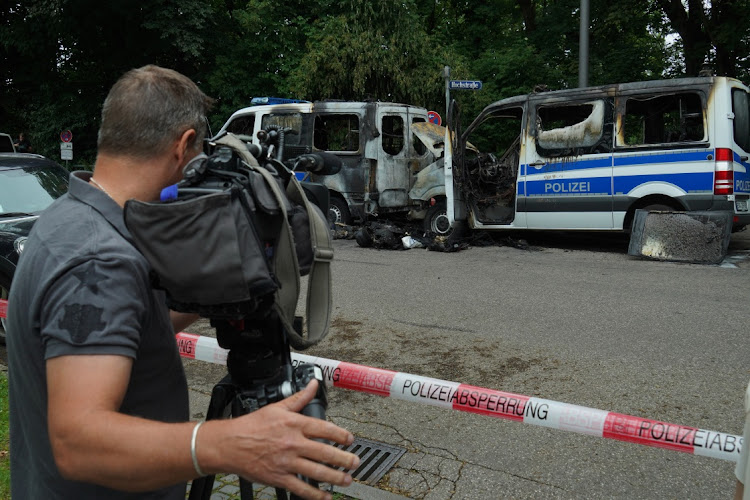 General view of burnt police vans after protesters attack ahead of the G7 summit on June 22 2022 in Munich, Germany.
Image: Johannes Simon/Getty Images

Leaders from the Group of Seven rich democracies and the Nato alliance will work to increase pressure on Russia over its war in Ukraine next week, while underscoring their continued concerns about China, senior US officials said on Wednesday.

President Joe Biden leaves Saturday to meet other G7 leaders in southern Germany before heading to Madrid for a summit where Nato is expected to announce plans to expand its forces in Eastern Europe and Washington will lay out steps to strength European security.

Inclusion, for the first time, of leaders from Australia, Japan, South Korea and New Zealand in the NATO summit was aimed at showing that the war in Ukraine has not detracted from Western nations' focus on China, the officials said.

G7 leaders, meeting at an alpine castle an hour south of Munich on June 26-28, are also expected to address China's “coercive economic practices,” which have become even more aggressive in recent years, one of the officials said.

“Russia's war against Ukraine has galvanised our partnerships around the world,” a second official said. “It's also showing how Ukraine is not causing us to take our eye off the ball on China. In fact, quite the opposite.”

In fact, a new strategic concept to be endorsed by Nato leaders when they meet in Madrid June 29-30 will address threats posed by Russia, and for the first time, China, the official said.

Germany, which leads the G7 this year, has also invited Argentina, India, Indonesia, Senegal and SA to participate in select sessions at the summit.

“At the summit, we will roll out a concrete set of proposals to increase pressure on Russia and demonstrate our support collectively for Ukraine,” one of the officials said, without providing details.

The impact of Russia's war in Ukraine in driving energy and food prices sharply higher and jeopardising low- and middle-income countries will be another focal point, officials said.

“Leaders will also advance a vision of the world grounded in freedom and openness — not coercion, not aggression, not spheres of influence. They will strengthen our co-operation on economic issues, cyberspace and quantum, and in particular, the challenges posed by China,” the official added.

Ukrainian President Volodymyr Zelenskyy will address both meetings virtually, mapping out his battle plan to counter Russia and the security assistance his country needs to carry it out, US officials said.

Biden will meet bilaterally with German Chancellor Olaf Scholz and will meet in Madrid with Spanish President Pedro Sanchez and King Felipe, the officials said.

There was no announcement about any bilateral meeting between Biden and Turkish President Tayyip Erdogan, who is blocking plans for Finland and Sweden to join Nato, but one of the officials said Washington was confident that Turkey's concerns would be addressed and consensus could be reached.