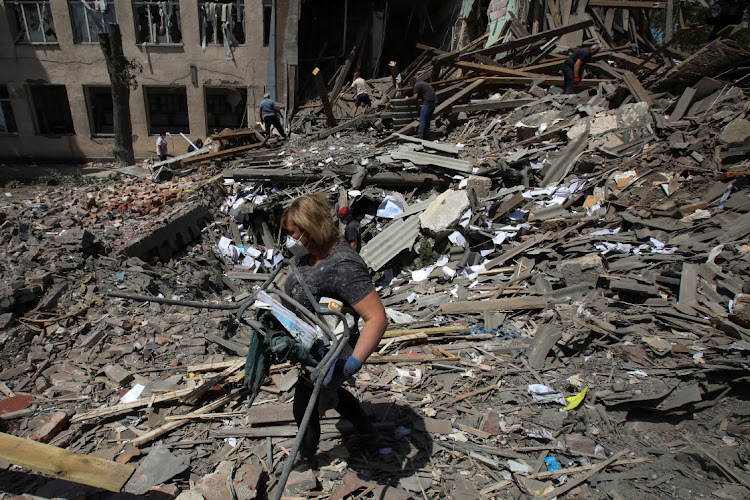 People remove debris of a building of the lyceum of railway transport destroyed by a missile strike, as Russia's attack on Ukraine continues, in the town of Liubotyn, in Kharkiv region, Ukraine June 20, 2022.
Image: REUTERS/Vyacheslav Madiyevskyy

The Kremlin said a peace deal with Ukraine isn’t possible until Kyiv accepts all its demands — leaving conditions at a stalemate as Russia’s invasion nears the four-month mark. Precision artillery systems have arrived in Ukraine from the US.

The timeline for Ukraine to achieve EU membership will hinge on the country’s ability to enact reforms, as well as the course of the war, a top aide to President Volodymyr Zelensky said. A formal move by European Union leaders to grant candidate status to Kyiv after intense lobbying is expected to come at the bloc’s summit in Brussels starting Thursday.

Moscow informed the French Ambassador in Russia on Friday that one of France's diplomatic staffers was no longer welcome in Russia, a spokeswoman of the French Foreign Ministry said in a statement.

"We regret this unjustified decision", the Ministry added when asked to confirm whether the cultural attache to the French Embassy in Moscow had been asked to leave the country.

"Circumstances dictate the need to take urgent joint measures on strengthening the defence capabilities of the union state, increase the combat readiness of troop groupings and the unified regional air defence system," Interfax quoted Shoigu as telling his Belarusian counterpart in Moscow.

Germany triggered the “alarm stage” of its emergency gas plan on Thursday in response to falling Russian supplies but stopped short of allowing utilities to pass on soaring energy costs to customers in Europe's largest economy.

The measure is the latest escalation in a standoff between Europe and Moscow since the Russian invasion of Ukraine that has exposed the European bloc's dependence on Russian gas supplies and sparked a frantic search for alternative energy sources.

Estonia expects next week's Nato summit in Madrid to designate additional units for its defence, but the troops would not be hosted on its soil in a compromise from demands for boots on the ground, Estonian Prime Minister Kaja Kallas told Reuters.

Since Russia invaded Ukraine in February, the Baltic states of Estonia, Latvia and Lithuania have been calling for their region to receive the biggest build-up of combat-ready Nato forces in Europe since the end of the Cold War, fearing they could be next.

Ukraine will be accepted as a candidate to join the EU on Thursday, a move that will boost the country's morale as the battle with Russian troops for two cities in the east reached what one official called a “fearsome climax”.

Though the approval of the Kyiv government's application by EU leaders meeting in Brussels is just the start of what will be a years-long process, it marks a huge geopolitical shift and will anger Russia as it struggles to impose its will on Ukraine.

Friday will mark four months since Russian President Vladimir Putin sent troops across the border in what he calls a “special military operation” partly necessitated by Western encroachment into what Russia views as its sphere of influence.

The Kremlin on Thursday reiterated its assertion that Russia has not stolen any grain from Ukraine as Turkey said it was probing allegations from Kyiv and would not allow any such grain to be brought to Turkey.

Kyiv's ambassador to Ankara said in early June that Turkish buyers were among those receiving grain that Russia had stolen from Ukraine, adding he had sought Turkey's help to identify and capture individuals responsible for the alleged shipments.

Asked about Turkish Foreign Minister Mevlut Cavusoglu's comments that Ankara would investigate, Kremlin spokesperson Dmitry Peskov said: "You should ask the foreign ministry. Russia has not stolen any grain."

Kremlin: Russia is a very reliable energy supplier to Europe

Kremlin spokesperson Dmitry Peskov said on Thursday that Russia was a very reliable energy supplier to Europe and "strictly fulfils all its obligations".

He also told a daily conference call with reporters that Germany had been informed about the "service cycles" of the Nord Stream 1 gas pipeline, which is due to undergo maintenance from July 11-21.

Gas flows through the Nord Stream 1 undersea pipeline from Russia to Germany have been falling. Russia says a technical issue caused by sanctions has forced the state-owned Gazprom to reduce the flow, while Italy and Germany say this is a pretext to send less gas.

Britain introduced a new tranche of trade sanctions against Russia on Thursday, a notice published on the government website said.

The 'Notice to Exporters' listed new measures including prohibitions on the export to Russia of a range of goods and technology, the export of jet fuel, and the export of sterling or EU denominated banknotes.

It also said there were new prohibitions on the provision of technical assistance, and financial services, funds, and brokering services relating to iron and steel imports.

Moscow fully supports the revival of the 2015 nuclear deal between Iran and major powers, Russian Foreign Minister Sergei Lavrov said on Thursday in Tehran at a press conference alongside his Iranian counterpart.

For his part, Iran's Foreign Minister Hossein Amirabdollahian blamed Washington for stalling talks that started over a year ago in Vienna, and called for all US sanctions to be removed for the nuclear pact to be revived.

The Ukraine crisis can only be resolved diplomatically, Iran's Foreign Minister Hossein Amirabdollahian said on Thursday during a press conference in Tehran alongside his Russian counterpart Sergei Lavrov.

The Russian foreign minister arrived in Tehran on Wednesday for a two-day visit to discuss Iran's 2015 nuclear deal, boosting bilateral and energy cooperation, and international and regional issues, according to Iranian state media.

"In regards to Ukraine, we believe that American actions done through NATO are part of the crisis' causes. However, the Islamic Republic does not see war as a solution and welcomes political talks on this issue," Amirabdollahian said.

While Moscow is challenging Western sanctions over Ukraine, Tehran's clerical rulers have been struggling to keep Iran's economy afloat because of U.S. sanctions that were reimposed after Washington exited Tehran's nuclear deal in 2018.

Two Britons and a Moroccan who were captured while fighting for Ukraine and sentenced to death by a court in the self-proclaimed breakaway Donetsk People's Republic (DPR) are preparing to appeal, the TASS news agency cited one of their lawyers as saying on Thursday.

The court in DPR, one of Russia's proxies in eastern Ukraine, found the three men - Britons Aiden Aslin and Shaun Pinner and Moroccan Brahim Saadoun - guilty of "mercenary activities and committing actions aimed at seizing power and overthrowing the constitutional order of the DPR".

The fight for the twin cities of Sievierodonetsk and Lysychansk in Ukraine's Luhansk region is “entering a sort of fearsome climax”, said Oleksiy Arestovych, adviser to Zelensky. Russia is seeking to capture both Luhansk and Donetsk, which make up the Donbas region — the nation's industrial heartland.

On the diplomatic front, European leaders on Thursday will formally set Ukraine on the long road to EU membership at a summit in Brussels. Though mainly symbolic, the move will help lift national morale after four months of bloody conflict that has killed thousands, displaced millions and destroyed cities.

“We must free our land and achieve victory, but more quickly, a lot more quickly,” Zelensky said in a video address released early Thursday, reiterating Ukrainian demands for larger and faster weapons.

G7, NATO leaders to ratchet up pressure on Russia, keep eye on China -US officials

Leaders from the Group of Seven rich democracies and the NATO alliance will work to increase pressure on Russia over its war in Ukraine next week, while underscoring their continued concerns about China, senior US officials said on Wednesday.

President Joe Biden leaves Saturday to meet other G7 leaders in southern Germany before heading to Madrid for a summit where NATO is expected to announce plans to expand its forces in Eastern Europe and Washington will lay out steps to strength European security.

Inclusion, for the first time, of leaders from Australia, Japan, South Korea and New Zealand in the NATO summit was aimed at showing that the war in Ukraine has not detracted from Western nations' focus on China, the officials said.

G7, NATO leaders to ratchet up pressure on Russia, keep eye on China -US officials

Russian forces pounded Ukraine's second largest city Kharkiv and surrounding countryside with rockets, killing at least 15 people, in what Kyiv called a bid to force it to pull resources from the main battlefield to protect civilians from attack.