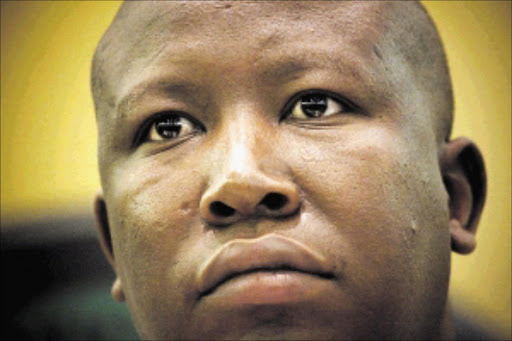 The ANC Youth League has called for a government change in Botswana and said it would establish a "command team" to work towards united opposition against the "puppet regime" of President Ian Khama.

Speaking in Johannesburg after the league's national executive committee meeting yesterday, its president, Julius Malema, said there had been a decline in the influence of the Southern African Development Community (SADC) and the African Union (AU) since Thabo Mbeki's departure from the presidential office.

In a veiled swipe at President Jacob Zuma and other African leaders, he said there was a "vacuum in the ideological and political leadership of Africa and the subregions".

"The ANC Youth League will also establish a Botswana command team, which will work towards uniting all oppositional forces in Botswana to oppose the puppet regime of Botswana, led by the Botswana Democratic Party," Malema said.

"The BDP is a foot stool of imperialism, a security threat to Africa and always under constant puppetry [sic] of the United States."

Malema said the opposition in Botswana needed to be consolidated and that his organisation would help to bring changes in a "democratic manner".

"We know that Botswana is in discussions to open a military base for the imperialists and the present government of Botswana has the potential to co-operate in this manner."

He said a detailed plan would be unveiled once a team had been established to handle the situation in Botswana.

"There is no army involved here, there is nobody who is going to be trained and overthrown though a coup," Malema explained.

He said that, after the "interaction", a coalition party might be formed because the youth league believed opposition parties in Botswana were not strong enough to "properly topple that government through democratic means".

Previously, the youth league has questioned South Africa's role in Libya after Zuma's government voted for foreign intervention in the conflict in that country.

Yesterday Malema upped the ante in his stance against African leaders and took another swipe at Zuma, saying under Mbeki's leadership the AU and SADC had direction.

"The issue of the African Union and SADC, in particular, is informed by the latest development with regards to the Ivory Coast and Libya.

"In the past, we know president Mbeki used to represent that agenda very well.

"At least as a continent, we knew where we stood," Malema said.

"The African agenda is generally no longer a priority, and we think that there is a temptation by the coloniser and the imperialist to want to re-colonise Africa in a different but sophisticated way - and president Mbeki stood directly opposed to that type of conduct," he said.

Political analyst Daniel Silke said these type of comments have been a trend with Malema - he did the same about the situation in Zimbabwe - and that his latest remarks about Botswana could be a potential embarrassment to South Africa.

Silke said Malema's utterances could also cause tensions within SADC.

"It is an embarrassment for the ANC to have a section of its party make statements on issues of foreign policy. The minister of foreign affairs and the president should be the ones who speak on foreign policy, without interference.

"This again brings into the spotlight the lack of discipline in the ANC, which is the failure of the president and other ANC leaders to stop Malema from commenting on foreign policy matters," Silke said last night.