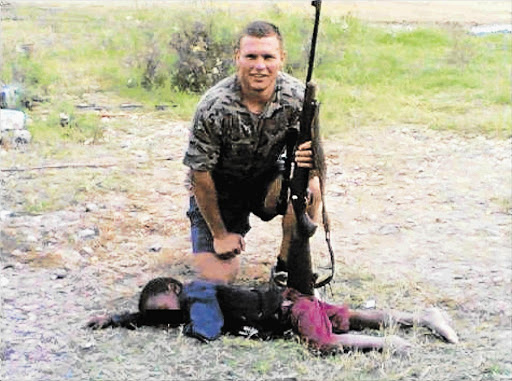 The boy is fine

The age of the photograph of a white man holding a rifle over the apparently lifeless body of a black child is irrelevant to the Hawks, the unit's spokesman, McIntosh Polela, said.

"The age of the picture is not a factor to us. It is still being used on Facebook, so we cannot ignore it," he said.

According to Western Cape police, the man in the picture was taken in for questioning in Knysna in 2007.

He apparently told police he had paid the child to pose.

"I haven't received the 2007 docket yet. It will take several days to arrive. We will go through that docket and then decide what to do," Polela said.

A Sunday Times report said the photograph featured on the profile of a Facebook user who called himself "Eugene Terrorblanche". The picture sparked public outrage with the launch of an investigation by the police ministry. Authorities suggested that anyone who viewed the picture and failed to report it could face prosecution.

The commission's chairman, Lawrence Mushwana, said the environment where there were no regulatory mechanisms to fully subject user-registration to the relevant legislative provisions had resulted in users of these sites engaging in acts of hate speech or other human rights violations. - Additional reporting Sapa