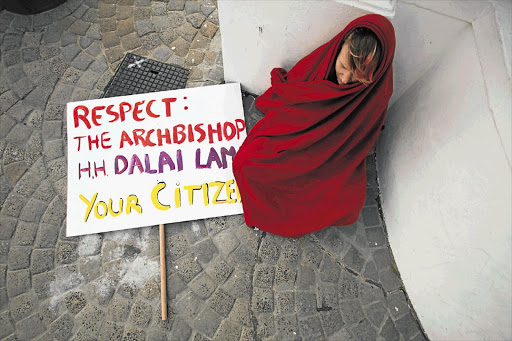 Lizzie Kruger meditates outside parliament during a vigil for the Dalai Lama Picture: SHELLEY CHRISTIANS

Dalai Lama supporters, including the Desmond Tutu Peace Centre, are on tenterhooks over the status of the Tibetan spiritual leader's visa application to South Africa.

Shortly before noon, Clayson Monyela, spokesman for the Department of International Relations and Cooperation, was quoted as saying: "We will communicate the decision to the applicant, which we are doing now."

This created the impression that the Dalai Lama's office in New Delhi had received a response. But not so, Monyela later told The Times: "I never said that."

"The outcome of the visa application process will be communicated to the applicant only."

Sonam Tenzing, the Dalai Lama's Africa representative, said late yesterday that a colleague in India contacted the office of the South African High Commissioner in New Delhi yesterday and was told that they were awaiting advice from Pretoria.

Nomfundo Walaza, CEO of the Desmond Tutu Peace Centre - which had invited the Dalai Lama to South Africa to join Tutu for his 80th birthday celebrations and to deliver the inaugural Desmond Tutu Peace Lecture - said they, too, were in the dark about the status of the visa application.

Said Ehrenreich: "It would appear as if we are letting China dictate our foreign policy."