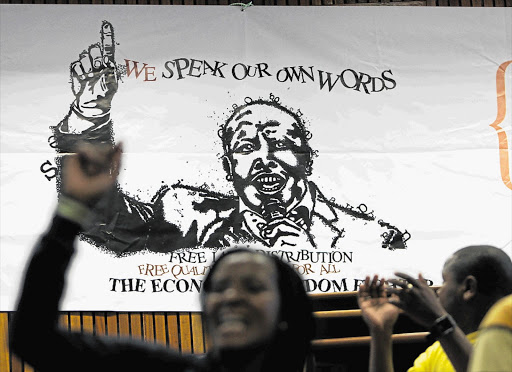 Delegates sing the praises of the disgraced president of the ANC Youth League, Julius Malema, during elections for the Western Cape branch of the organisation in Cape Town. Picture: ESA ALEXANDER

Julius Malema, the league's embattled president, was billed to speak at the two-day elective conference, which was to have started at 10am on Saturday.

The league's secretary-general, Sindiso Magaqa, spent much of Saturday walking up and down the University of the Western Cape campus, the conference venue, trying to avert chaos.

Yesterday afternoon, he announced that the gathering had been called off.

Magaqa dismissed reports that among the reasons for the cancellation was that delegates were divided about Malema. He said the true reason was that there were not enough delegates to form a quorum.

The reports were the work of "people who always want news out of the president, to drag [him down] ."

The Sunday Times reported yesterday that Malema had spent hours holed up in a Cape Town hotel, then wiled away Saturday afternoon with ANC provincial secretary Songezo Mjongile at the V&A Waterfont.

Delegates at the university, most of whom arrived in sleek cars, turned the event into a party. Most of them could be seen drinking while loud music blared from car speakers.

After Magaqa's announcement yesterday, several groups hunched dispiritedly with their luggage under the trees.

One group emerged from the conference hall carrying sealed plastic bags containing white T-shirts with a picture of Malema's face.

A lecture hall in which a group of delegates spent the night was littered with empty liquor bottles. Some delegates were still drinking.

After calling off the conference, Magaqa raised one of the youth league's favourite subjects, the economy: "We can't live in a country where our economy is still owned by individuals . Stellenbosch mafia chowing our economy. We can't allow that thing.

"We are the generation with a vision.