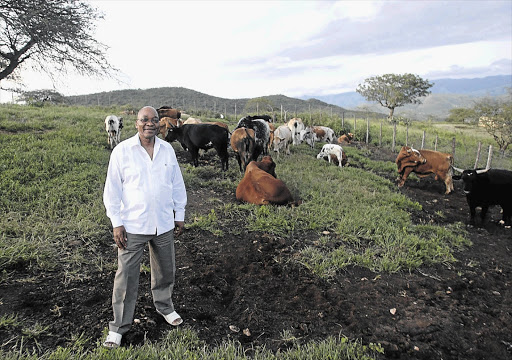 President Jacob Zuma with part of his herd of cattle at his home in Nkandla, KwaZulu-Natal. File photo
Image: SIMPHIWE NKWALI.

Madonsela found that the department of public works' records indicated that, by the time the probe was concluded, total expenditure on the project amounted to R215,444,450.

The homestead has been at the centre of controversy after it emerged that the public works department had approved upgrades to the President's KwaZulu-Natal homestead.

Madonsela has been criticised by the African National Congress for her handling of the probe.

ANC secretary general Gwede Mantashe has said that the release of the report close to May 7 would indicate an intention to "muddy the waters in the election campaign".

Madonsela previously dismissed claims that her office would time the release of her final report with the aim of influencing the elections.

On Sunday, Mantashe said the party did not have any expectations from the Nkandla report.

He called it a "political report", saying the ANC would treat it that way.

In an eNCA interview in February, Zuma disputed that more than R206 million had been spent, saying the security upgrades cost around R50 million.

Zuma also told the news channel that he would not resign.