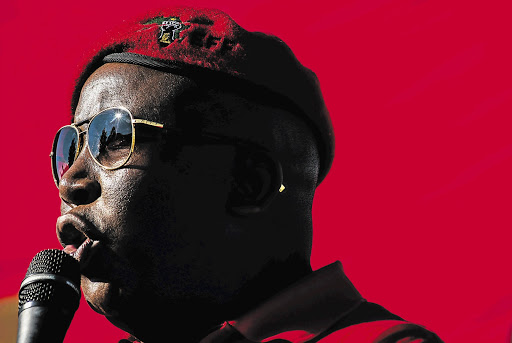 As Julius Malema moved up and down the back of an old truck which was being used a stage, the silver buckle of his Louis Vuitton shoes gleamed in the sun.

The shiny metal was hard to ignore as its glint caught the eye every time Malema turned to face the sun.

Although the self-styled commander-in-chief of the Economic Freedom Fighters has ditched the "bling-bling" dress code of his ANC youth league days, the expensive pair of shoes stubbornly offers proof of his old lifestyle.

Now, as he canvasses for votes from poor South Africans, Malema has been trying hard to project himself as one of them - opting to wear plain T-shirts and jeans to all his gatherings.

"We are the organisation of the poor of the poorest because the poor has been neglected," Malema told a crowd of about 500 people who gathered at a dusty open veld in Phuthaditshaba on Thursday.

His audience nodded, clapped and ululated as Malema sold his EFF as the party of the lowly paid workers, the unemployed and the poor.

To appeal to his new target market, Malema has condemned the youths' obsession with material things.

"You should not compete over material things. Just because you own a leather jacket you think you have arrived or just because you own a Carvella (shoes). We should compete about how many qualifications do you have," he told his supportersin Botshabelo, outside Bloemfontein.

At all the meetings, Malema said the ANC had abandoned the poor and had done little to improve their lives since 1994.

"You don't have houses. You don't have water and electricity. It is because you've been voting for the same party and expecting different results. I'm here to open your eyes."

This is the message Malema has been sending since his organisation was formed in July last year.

In addition to promising free education, higher wages and social grants, Malema promised his Free State followers that politicians would, under EFF rule, be treated like any other citizens.

"Why should the state provide housing and cars to politicians? These people get paid like ordinary people. They must buy their own houses and their own cars."

Malema later told journalists that all EFF leaders would live "ordinary" lives. "We are all committing to living a life of ordinary people. We are living it today," he said before racing away in a Mercedes-Benz S350.