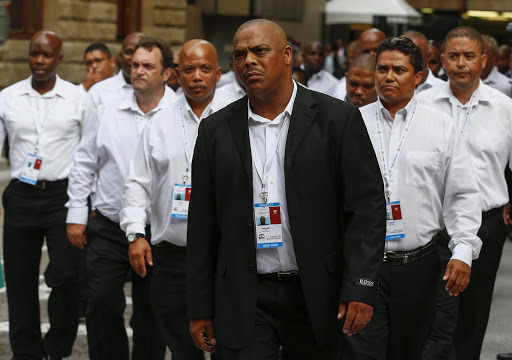 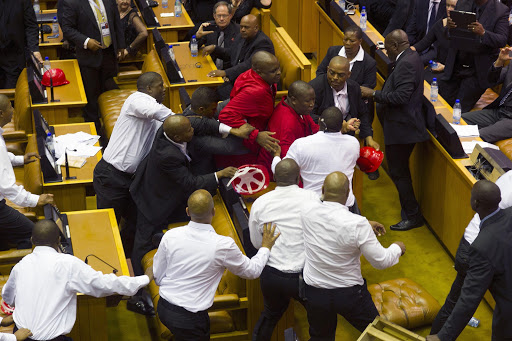 At least one police officer was part of the contingent that forcibly removed EFF MPs from the National Assembly during the state-of-the-nation address, according to a report.

Captain Walter Prins, 42, a public order police officer, was identified from the security pass around his neck, seen in a photo taken by the European Pressphoto Agency, the Daily Maverick has reported.

According to his pass WW Prins is part of a "high risk" detail and from the SAPS (SA Police Service).

He is pictured arriving for the opening of Parliament ceremony and then later helping to evict Economic Freedom Fighter MPs from the House.

Democratic Alliance MPs walked out of the state-of-the-nation address on Thursday when Speaker Baleka Mbete and National Council of Provinces chairwoman Thandi Modise failed to explain if police, or Parliament's security officers, were used to expel the EFF members.

DA MPs said they were opposed to the use of police as they report to the executive arm of government and should thus not interfere with the functioning of Parliament.

On August 30, 2014, nine days after riot police in body armour, armed with shields and batons, entered the National Assembly to expel EFF MPs, Prins posted on Facebook in Afrikaans: "To all the members of POPS Cape Town. I wish you strength and thank you for a helluva month. Particularly the guys in my platoon…Ps. Don't worry, at some stage in the near future we'll go back into Parliament for old Julius! LoL."

In September he posted three photographs of police in the foyer of the National Assembly. The pictures appear to have been taken on August 21.

"In the once hallowed halls of Parliament, in a hunt for Juju LOL," he wrote underneath.

"I can't admit or deny anything," he told the Daily Maverick when asked if he had been in charge of the police detail that removed EFF MPs.

"We signed an oath [of secrecy]. I can't tell you anything."