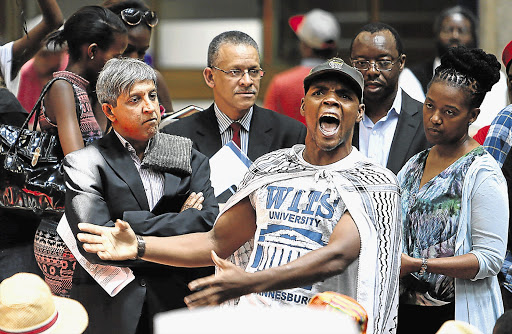 Mcebo Dlamini is no longer the president or even a member of the the Students’ Representative Council (SRC) at Wits.

According to Wits Vice-Chancellor and Principal Professor Adam Habib, Dlamini had been found guilty of disciplinary misconduct in February of 2015.

He had appealed to Habib to allow him to remain president while the disciplinary panel’s decision was being reviewed.

"For the purposes of clarity, I would also like to state that the separate matter of Mr Dlamini's recent declaration of admiration for the fascist leader, Adolf Hitler, and what I believe to be racist comments regarding whites, did not influence my current decision to require him to step down," Habib said in a statement.

"However, they cannot be ignored and I have referred the matter to the Legal Office for investigation. This matter will take its due course," Habib said.

Habib further went on to say that he believes Dlamini's statements brought the university into disrepute, and "violate the fundamental values of Wits University."

"As someone who claims to love this institution, I believe that Mr Dlamini has single-handedly wrought more damage on its reputation than any other person who I can think of in at least the last two decades," Habib said.

Habib further pointed out that Dlamini is an object lesson in why more students should participate in the student council elections.