Economic Freedom Fighters (EFF) leader Julius Malema launched his party manifesto at Orlando stadium over the weekend - Cartoonist Zapiro weighs in on how the controversial politician may be perceived by many. 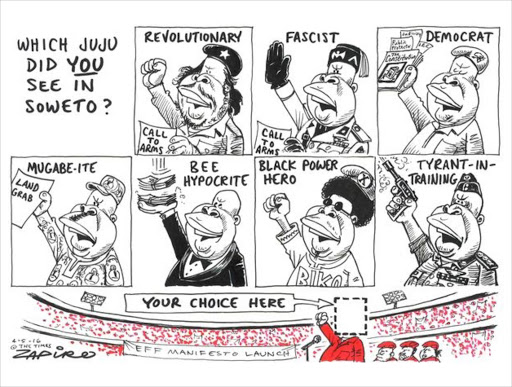 Thousands of EFF supporters hung onto Malema's words as he outlined the plans and policies his party sought to deliver ahead of the municipal elections in August.

The EFF manifesto contained familiar promises such as the rooting out of corruption, jobs, service delivery and the restructuring of government departments to include a six-day work week.

Malema also showcased his militant side, warning the African National Congress (ANC) that the EFF was ready to take up arms.

“I am whispering to you, Zuma, wherever you are, those soldiers are going to turn their guns against you…leave office before the soldiers turn against you. The army is EFF,” he threatened.

In the same vein, Malema also touched on land reparation and violence.

“We are not provoking violence. We are the most peaceful organisation. We fight in Parliament. We fight in court…we will never start any violence. But anyone who comes with violence and thinks that they can intimidate with violence – we will defend ourselves," he said.

Zapiro says Malema's many faces are what inspired him to pen his latest cartoon.

"For me, Malema is the most dynamic politician in the country at the moment, but he is a mass of contradictions. I started finding him quite dangerous in the (ANC) Youth League when he said he would kill for Zuma unless the charges were dropped against him back then.

"When things got too hot to handle, I gave him a bit of a chance and he has shown himself to be good at mobilising people; I think he has done some good things in Parliament and he is in support of the public protector, and he brought the Nkandla case to the Constitutional Court which is very good," Zapiro says.

However, Malema's recent antics have seen him call for arms and vowing that he will take control of government "through the barrel of a gun”.

With this, Zapiro says Malema has shown another, dangerous side of himself.

"I think it is very wrong-headed of him to call for arms; he has his own skeletons of being a BEE beneficiary and tenderpreneur, he is just a contradiction.

“I also find it interesting that everyone sees what they want to see when he stands up and they take him seriously. He is a democrat, fascist and revolutionary and its powerful to see how people have reacted to the cartoon already, it seems to have touched a chord, eliciting a lot of comments on Facebook."

Watch the 5 top things Julius Malema said at the #EFFManifestoLaunch

Watch the 5 top things Julius Malema said at the #EFFManifestoLaunch