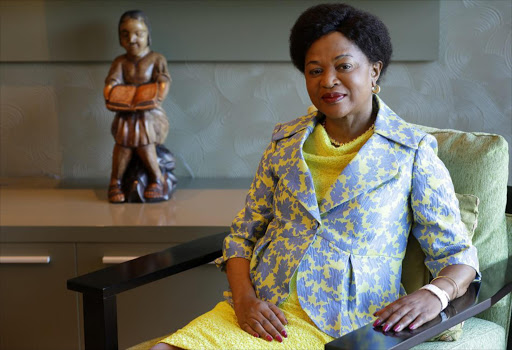 Baleka was delivering a eulogy at the funeral of Lulu Dube‚ the last surviving daughter of ANC co-founder and president John Langalibalele Dube‚ in Ohlange‚ north of Durban on Saturday.

"We have a youth that has no respect‚ Baba Buthelezi can attest to this as we work together in parliament‚” she said in reference to IFP leader Mangosuthu Buthelezi.

"I remember at one time I bumped into a leader of the Shembe church who asked me if it was us as the ANC who came up with the idea of overalls in parliament. I had to apologise on behalf of the likes of Malema‚" she said.

"There's nothing wrong with overalls at work but they serve a different purpose and in that house there's nothing that requires overalls‚" said Mbete.

She questioned why a leader would draw a gun and kill another at a party meeting.

"Mafukuzela (Dube) must be turning in his grave‚" she said.

Mbete called on ANC members to work without expecting reward saying their predecessors criss-crossed the length and breadth of the country on foot.

"Now people want to be paid otherwise they steal or receive ill-gotten gains‚" she said.

"I want to say this: all parties have a right to campaign freely and we are not enemies.”

Lulu was one of Dube's six children and worked as a nurse in Durban as a young woman.

On Saturday at the funeral‚ Buthelezi’s presence elicited excitement among mourners.

They ululated and applauded at the mention of his name.

When he spoke‚ he praised Lulu‚ saying she led by example and walked in her father's footsteps.

"No wonder she was so well loved...we thank the Lord for a long life well lived. She gave freely of herself and we all benefited‚" he said.

Dube’s father‚ apart from contributing to the founding of the ANC‚ was a noted South African journalist‚ educator and cleric.

Born in 1871‚ he was educated by American missionaries in the US and started what is now Ohlange High School and founded Illanga newspaper.

Dube pleaded with authorities for justice in his time. He appealed to the British for the education of his people.

"They the Boers and the British took it from us‚ the land of my birth. That little spot of God's earth which Providence had given us to be our own‚ our native land.”

Dube once wrote in resistance to the Native Land Act: “Why must we‚ alone of all the peoples of the earth‚ condemn ourselves to serfdom in order to be permitted to live in our mother country‚ while every nondescript from over the sea‚ be he black or white‚ is allowed to thrive on the fat of our land‚ and to erect a home wheresoever he will?”.