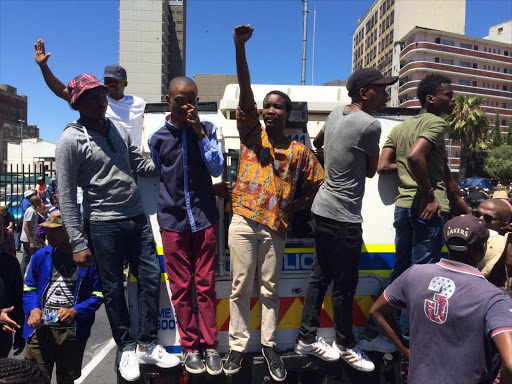 Students who marched to the gates of Parliament climbed onto a police vehicle on 26 October 2016.
Image: David Harrison

Finance Minister Pravin Gordhan emerged from parliament to meet thousands of students protesting for free tertiary education ahead of delivering his mini budget on Wednesday.

He received a rowdy reception. “Hold on‚ hold on‚” he said. “I’ve been in your position many times over‚ “ he told the protesters.

“All we are asking for is co-operation and stick to an agreement you make.”

Bombarded with questions‚ he appealed to students to hand over their memorandum and said they were being unreasonable.

“I can read the memorandum myself‚” he said. Gordhan’s response to the students‚ by going outside to hear their demands‚ was in stark contrast to a similar protest outside parliament in 2015.

Protesting students swarmed Parliament ahead of Finance Minister Nhlanhla Nene's mid-term budget in October 2015. Pandemonium broke out as they forced their way into the Parliamentary precinct and were pushed back by police using stun grenades. Nene continued delivering his budget speech.

Gordhan signed the memorandum presented to him by students. As he went back inside he was heard telling a student leader‚ "If you are barring us from speaking‚ it's fine."

He said that he needed to make a budget speech and there was no need to waste his time.