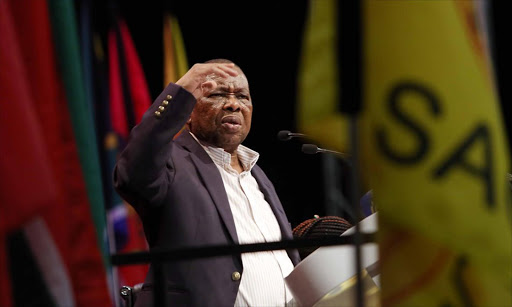 Speaking at the ANC’s 105th anniversary celebrations‚ he said that there was a close relationship between the two.

“Inside our own movement we are faced with the destructive challenge of factionalism. Even more disturbing is that the factions have nothing to do with ideological or tactical differences on how best to achieve the objectives of our struggle.

“It is factionalism largely based on competition for control over organisational power and its use as a step ladder for access to and control over public power and resources and dispense patronage‚” Nzimande said.

“Factionalism or looting use public resources to push private corporate‚ personal‚ family and elitist interests‚ and as the base for corruption and maladministration. This is the entry point for corporate capture.

“There is a very close relationship between factionalism and corruption‚ which is an instrument of looting. The two constitute the twin dangers facing the ANC and our Alliance‚” Nzimande charged.

He added that the SACP would continue to “serve as a dependable‚ consistent and resolute force to stop these dangers in our struggle to successfully complete our liberation as a people and achieve social emancipation”.

Nzimande said that one of the ANC's most important achievements was its ability to unite the African majority in our country which was an achievement the organisation could not dare take for granted.

“The unity of the African people is the foundation upon which we will build a new South African nation. We must not forget how many movements have been torn apart by internecine‚ inter-tribal and ethnic conflicts. South Africa needs the ANC‚ but indeed a united ANC and not a factionalised ANC.

“The SACP therefore wholeheartedly embraces the theme of 'Unity in Action' which must also include the unity of our Alliance‚ mass democratic formations and indeed the historical mass base of our struggle. Unity in action must mean dealing decisively with all the wrong things happening in our movement and not become just a cliché‚” Nzimande added.