Zuma starts with the good news: growth to nearly treble 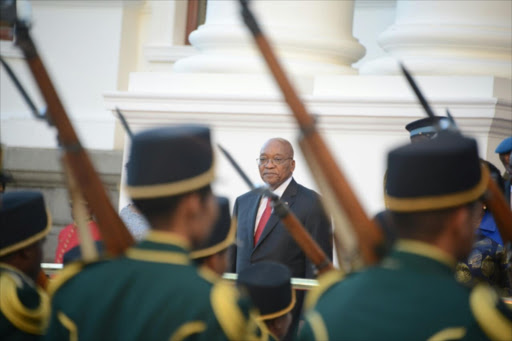 President Jacob Zuma arrives at the 2017 State of the Nation Address.
Image: GALLO

The economy was expected to grow 1.3% this year‚ up from the estimated 0.5% in 2016‚ President Jacob Zuma said in his state of the nation address on Thursday.

Despite the uncertain global economic environment‚ SA had entered a period of recovery. However the economy was not growing fast enough to create the much-needed jobs.

The president reiterated the government’s commitment to the independent power producer programme which would be expanded to other sources of energy including coal and gas in addition to renewable energy.

He insisted that undue government delays and unnecessary red tape related to investment — such as licences and visas — would not be tolerated. “We should make it easy to do business in SA‚” the president said.

He announced that the government would train about 10‚000 youths as plumbers and water agents.

“We call upon municipalities to support the war on [water] leaks…. Government is working hard to ensure bulk water supply to [ensure] economic growth and increase access for vulnerable rural municipalities‚” said Zuma.

SA has been hit by successive droughts in the past three years. Last year’s drought was the worst since 1992.

Zuma also announced that the South African National Road Agency Ltd (Sanral) had embarked on the planning for the R4.5bn upgrade of the Moloto road.

Reporting on progress with the expanded public works programme‚ Zuma said that since 2014‚ 2-million work opportunities had been created on the road to achieving the target of 6-million by March 2019. Of these‚ more than 1-million had been taken up by youth