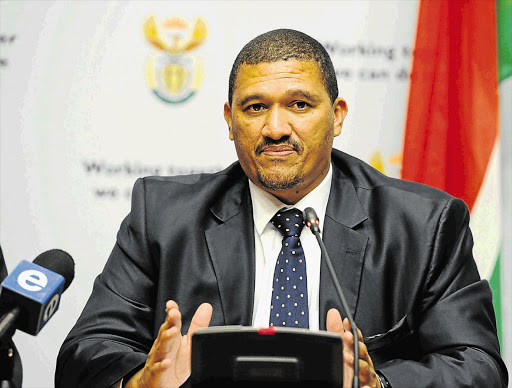 ANC disciplinary processes have been captured by a faction “driving a regime change”‚ according to ANC Western Cape chairman Marius Fransman‚ who is fighting allegations that he sexually harassing one of his employees.

Fransman was reacting to news that the party’s National Disciplinary Committee (NDC) had upheld its decision to suspend him for five years after he failed to show up at his hearing.

He was initially found guilty by the same committee last year but appealed. The ANC’s National Disciplinary Appeals Committee then ruled that he should be given a chance to have his own witnesses to take the stand before a final decision is made.

The furore was sparked by claims by Louisa Wynand. She said Fransman sexually harassed her when they travelled to the North West for the ANC birthday celebrations last year.

Last week‚ Fransman told the media that he was back as the party chairman.

He also said he would not present his case at the party’s NDC but would rather petition the ANC National Executive Committee to decide on his fate.

In a statement sent to TimesLIVE on Friday‚ Fransman reacted to the latest decision by the NDC.

“I have decided a while ago that as a leader standing for equality and fairness‚ I will not allow a ‘kangaroo court’ on anyone‚ and definitely not on me!” Fransman said.

“Clearly the ANC’s disciplinary processes have been captured by the faction driving a regime change‚ and with no other interest than trying to secure delegates for ANC national conference.”

He said he was not surprised by the latest decision of the NDC as he already knew that his detractors were not happy that he had been given a lifeline by the appeals committee.

“I am glad the regime-change agents have shown their hand‚ and I will now be able to put all documents on this matter in front of the NEC‚” he said.

Fransman added that his disciplinary matter had been compromised from the start.

He has previously blamed NDC chairman Derek Hanekom of being part of a faction that wants him out of the party.

He has also in the past lashed out at ANC secretary-general Gwede Mantashe‚ whom he accused of siding with some party members in the Western Cape‚ including provincial secretary Faiez Jacobs‚ in a bid to be elected as the ANC’s deputy president.

Fransman has been open about being a staunch President Jacob Zuma supporter. He has labelled those opposed to Zuma as driving a regime change.