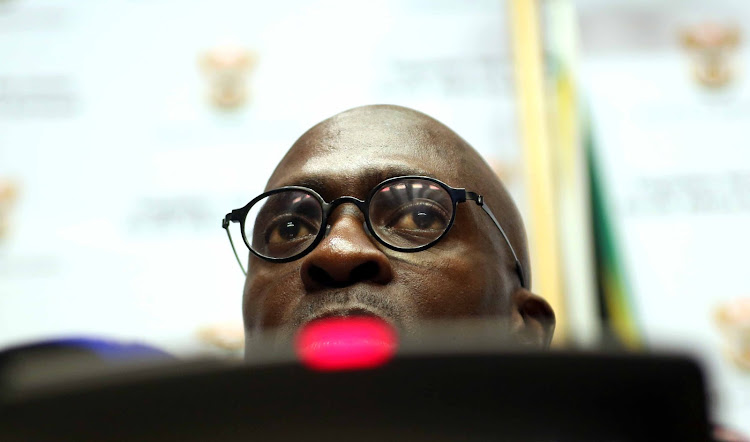 Finance Minister Malusi Gigaba during his press conference at the Imbizo centre ahead of the medium-term budget speech at parliament in Cape Town.
Image: ESA ALEXANDER/THE TIMES

Finance Minister Malusi Gigaba has revealed that the gross national debt will shoot up to R3.4-trillion or 60 percent of GDP by 2020 as government is forced to borrow more to fund its policy plans.

Presenting his Medium-Term Budget Policy Statement in parliament on Wednesday‚ Gigaba painted a grim picture of the state of the country's public purse stating that government was facing a budget deficit of R50.8-billion next year‚ which was projected to rise to R89.4-billion by 2020.

Gigaba said government was faced with difficult choices in the three years as the economy was expected to grow 1.2 percent next year before peaking at a modest 1.9 percent in 2020 with little growth in the tax revenue base.

Tax revenue was projected to come in at R1.4-trillion next year before rising to R1.7-trillion by 2020 while government expenditure was expected to rise to R1.9-trillion in 2020‚ leaving a budget deficit of just over R225-billion.

State-owned entities present a major fiscal risk to the economy but two of them‚ South African Airways and the Post Office‚ will receive R8.5-billion ...
Politics
3 years ago

This means government will in the next three years be forced to borrow more money to fund its spending plans‚ which would see the gross national debt rising to 60 percent of GDP or R3.4-trillion by 2021.

The national debt could climb even further should government decide to forge ahead with its nuclear build programme in the next few years‚ which was estimated to cost more a trillion rand.

But Gigaba said that the could not afford it at this stage although it remained part of the country's energy mix.

Debt service costs are expected from R183-billion in 2018 to R223-billion by 2021‚ making government loan repayments the fastest growing expenditure item at eleven percent of the budget.

This means government would in the next three be spending more money on paying its debts than on key service delivery areas such as education‚ social development and health services.

The education budget is expected to rise to around R400-billion a year by 2020‚ social development by R286-billion and health by R235-billion in the same period.

"Despite all these we were still able to maintain our social spending and infrastructure investments.

He said he was due to have a teleconference with credit rating agencies to discuss the country's dire financial position as part of his efforts to avoid further downgrades in the national sovereign rating.

"It's a very candid statement‚ it put the facts as they are‚" said Gigaba.

Gigaba said given dwindling tax revenue‚ government would be forced to get rid of some its programmes and would only allocate new money toward urgent and necessary policy interventions.

“In this context‚ government faces difficult choices. To offset revenue shortfalls and reduce borrowing‚ the contingency reserve has been pared down to R16-billion over the next three years.

“This leaves little room to manoeuvre if risks to the expenditure ceiling materialise. Beyond this‚ it is likely that some programmes will need to be eliminated‚ or their funding reduced‚” said Gigaba in his MTBPS.

The finance minister‚ who has only been in his position for seven months‚ acknowledged that the country's public purse was inadequate to fund its social needs.

The Cabinet was just finishing its morning Russian lesson when word came that Malusi Gigaba had locked himself in the toilet and wasn’t coming out.
Ideas
3 years ago

“Any new policy proposals‚ or expansion of existing programmes‚ should address only the most effective and necessary interventions.”

Gigaba's MTBPS also showed that salaries of public servants were continuing to be a huge expenditure item on the budget‚ which were expected to rise from just more than R580-billion in 2018 to R677-million by 2020.

He said the plummeting tax revenue was due to moderate salary increases‚ low bonus payments‚ job losses under collection of corporate income tax and declined collections of Value Added Tax as consumer spending had contracted in an under-performing economy.

“The economy and revenue could under-perform projections. The GDP growth outlook may be improving but the relationship between the growth and revenue collection could deteriorate further.

“Strains and imbalances within the public finances may become more pronounced.

“The public sector wage bill has increasingly crowded out other spending and limited government's ability to increase public spending.”

Government has now set up a task team of ministers comprising‚ among others‚ Gigaba‚ Naledi Pandor of science and technology and Jeff Radebe of monitoring and evaluation‚ to come with measures to rein-in government's run-away debt.

The cabinet is also considering the disposal of its non-core assets such as land and other properties to raise more money.