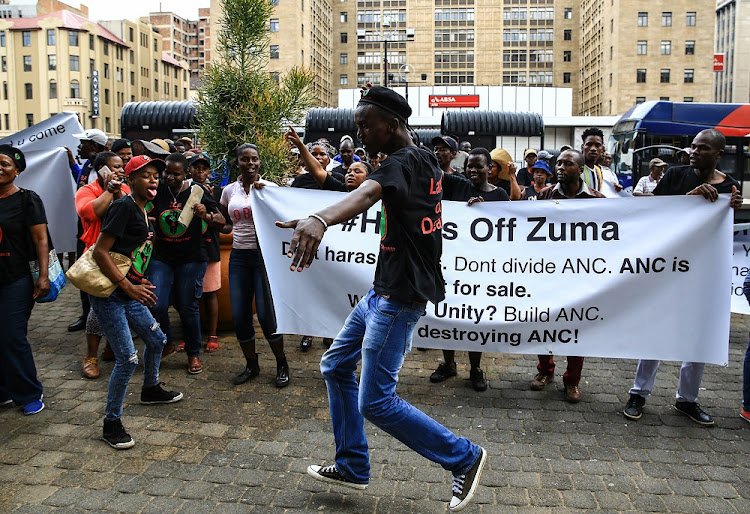 Black First Land First's (BLF) “Hands Off Jacob Zuma” march came to a halt after they delivered a memorandum to the ANC on Monday‚ demanding‚ among other things‚ that Zuma should remain state president until his term of office comes to an end.

This happened while the ANC's National Working Committee meeting was underway with the party's top six officials after being summoned to the ANC's head office to discuss Zuma's fate.

At the same time‚ Zuma‚ 75‚ was met with Zulu monarch King Goodwill Zwelithini at the Ondini Palace in Nongoma‚ northern KwaZulu-Natal.

The BLF read out the memorandum to ANC secretary general Ace Magashule‚ who braved the rain and appeared to be pretty relaxed while listening to the demands. He had been escorted outside to receive the memorandum of demands by heavily armed police and ANC VIP protection services.

Surrounded by BLF members and a heavily armed police a few meters away from Luthuli House‚ BLF treasurer general Thandiswa Yaphi said they would defend any attempts to remove Zuma from office.

"[We] note the reactionary conspiracy to remove President Zuma from office. We are to warn the leadership of the African National Congress against instituting a coup against President Zuma‚" Yaphi told Magashule‚ who nodded to this demand.

Magashule‚ who stood firmly with his hands folded‚ said he would take the BLF demands back into the NWC meeting‚ which was concurrently taking place at the party HQ.

"This is the environment we have created where people can march‚ where people can raise issues without any fear. I'm happy that you are so disciplined and we will talk about the things [you have raised]. The NWC is meeting now so I'll hand over the report [and] brief them about your discipline‚" said Magashule.

Zuma's fate has come under the spotlight over the past month after his term as ANC presidency came to an end in December.

An elderly woman was brutally assaulted on Monday, February 5 2018 when the BLF led a march to Luthuli House to demand that the ANC allow President Jacob Zuma to finish his term as state president...

A group of less than 1000 ANC members gathered outside Luthuli House on Monday as part of the "Hands Off Jacob Zuma" protest‚ led by BLF and joined by other civil society movements.

Other demands contained in the BLF memorandum included that the ANC should leave alone land that is under traditional leadership‚ to deal decisively with white "land thieves" through intensified land reform without compensation programme‚ request an audit of all senior prosecutors employed at the National Prosecuting Authority‚ and prioritise organisational renewal and Radical Economic Transformation.

Earlier‚ clashes broke out outside Luthuli House as a van carrying a group of people in BLF regalia were attacked as it approached the main entrance of the building.

Met with fists‚ punches‚ rocks and sjamboks‚ BLF got more than they bargained for as they were attacked in less than a minute by ANC members who were chanting anti-Zuma.

It took a heavy police contingent to remove the ANC members off the BLF members as others failed to run away in time.

The van driver‚ who was also about to get a beating‚ managed to escape after they failed to remove him from the car. His door was kicked and wipers removed before the police came and cleared the way for him to speed off.

Clashes broke out outside Luthuli House in Johannesburg on Monday as a van carrying a group of people in Black First Land First (BLF) regalia were ...
Politics
4 years ago

President Jacob Zuma must vacate the Union Buildings with immediate effect and stop putting a "nonsensical" ultimatum to the ANC top six.
Politics
4 years ago

As pressure mounts for President Jacob Zuma to vacate the Union Buildings in Pretoria‚ the South African Unemployed Workers Union and other ...
Politics
4 years ago