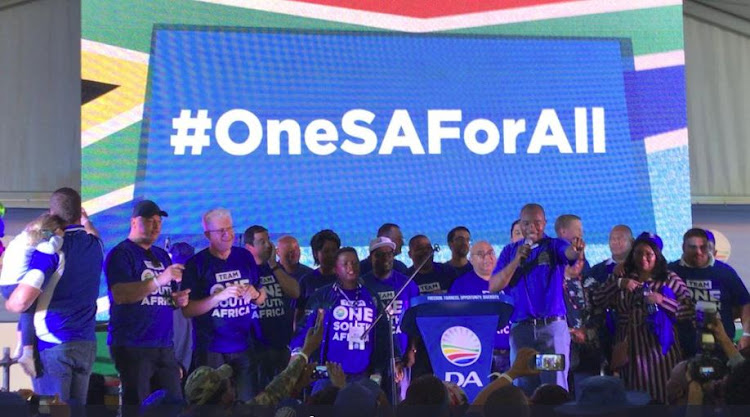 The NPA's Shamila Bahoti should charge the ANC with fraud, corruption, money laundering and racketeering in line with the law, says DA leader Mmusi Maimane.
Image: Democratic Alliance via Twitter

The DA has asked the National Prosecuting Authority (NPA) head advocate Shamila Bahoti to criminally charge the governing ANC with fraud, corruption, money laundering and racketeering as per the Prevention of Organised Crime Act (Poca).

Party leader Mmusi Maimane on Wednesday announced the decision, saying the party believed that under the stewardship of an "independent and uncompromised" Batohi there would "finally" be accountability.

"The provisions of Poca are clear. The ANC qualifies as an 'enterprise' as per the act’s definition, and the evidence at hand and actions taken by the ANC, in our view, satisfies the requirements of 'racketeering' and 'unlawful activity' as defined in Poca.

"There exists a clear-cut criminal case for the ANC to answer to, the organisation must be fined heavily and individual members found guilty must be locked away behind bars," Maimane said.

Maimane said the ANC must account for its "systematic and calculated corruption, theft and looting of public money" over the past 20 years.

An internal ANC poll says the party is likely to attract an increased number of white voters in Gauteng at the May 8 elections.
Politics
3 years ago

He said since the first revelations of "mass-scale ANC corruption" as far back as January 2001 when details of the infamous arms deal came to light, the ANC as an organisation had for almost 20 years acted as a collective criminal syndicate, operating to enrich itself, its members, and its "dirty business connections".

"With each passing year in political office, the ANC has become more and more brazen in its efforts to perpetuate its system of corruption and patronage that involves and implicates every lever of the state. The organisation has all but perfected the art of racketeering," he added.

In a letter to Batohi, Maimane said inquiries into state capture, Sars, the PIC and the NPA revealed theft and corruption on a breathtaking scale. He said recent revelations of the high-panel report of the State Security Agency further proved that the ANC was a criminal syndicate.

"Then we have the VBS (bank) collapse and its collateral damage and the revelations regarding Bosasa. All this information put together in its logical sequence points to a criminal enterprise being conducted with state resources," Maimane said in the letter.

He added that from the arms deal to power stations; from VBS and Bosasa; from Chancellor House to the SSA; and to every ANC-run municipality in the country, the pattern was the same.

"Large-scale corruption on a national scale could not have been contemplated and executed in isolation, it can only be the result of co-ordinated efforts on the part of the governing party to facilitate the corruption," he said.

The DA, Saftu and Right2Know (R2K) have all called for the arrests of those implicated in the explosive report by the high-level review panel into ...
Politics
3 years ago

The DA said legal provisions existed, evidence was at hand, the charges had been laid and nothing stood in Batohi's way to proceed with charging the ANC as an organisation and individuals concerned with fraud, corruption, money laundering and racketeering.

"We therefore implore advocate Batohi to make a decisive break from the modus operandi of her predecessors and move to charge the ANC and all implicated wrongdoers under the act.

"We must ensure those in office are held to the highest account. And this ANC criminal enterprise can only be defeated if there are consequences for the illegal actions," Maimane explained.

Maimane said corruption was in the very DNA of the ANC: "It was not simply a feature of Jacob Zuma and the Gupta family. It existed long before his presidency and has outlived his presidency," Maimane said.

JZ & the spies: Zuma 'hopes people are not opening a can of worms they might regret'

Jacob Zuma implied he should have been heard by a panel accusing his faction.
Politics
3 years ago