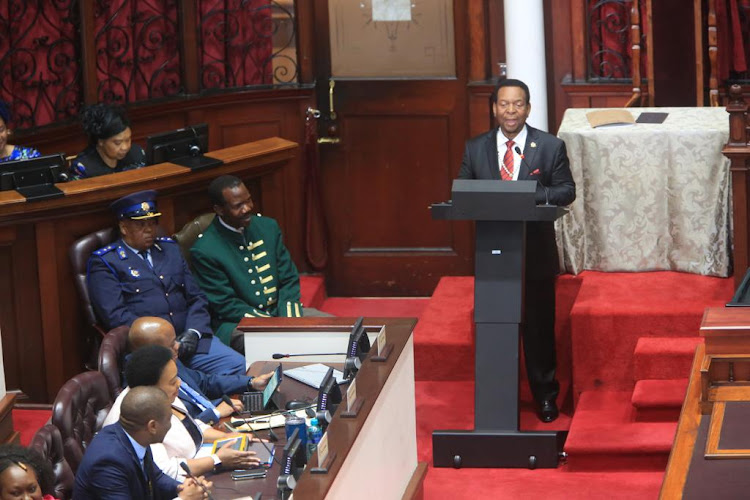 Zulu monarch King Goodwill Zwelithini has lashed out at traditional leaders who abuse women, calling their actions shameful to the Zulu nation.

Speaking during the official opening of the KwaZulu-Natal legislature in Pietermaritzburg on Thursday, King Goodwill said there was talk about amakhosi and izinduna abusing people, specifically women.

“I would not be speaking the truth if I did not speak the same about the traditional leadership institution of which I am the head. We also need honesty in leading the people. Talks we hear about amakhosi and izinduna who are said to be abusing people, especially women, are a shame to the Zulu nation,” he said.

This, said the king, was spreading propaganda which suggested that Zulus did not respect women, but abused them.

“We’re born of Queen Mthaniya, we’re born of powerful women who played a huge role in the liberation struggle and religion, we’re born of businesswomen. So anyone who says we don’t like women is not only mumbling gobbledygook, but does not know us.

“Yes, we agree there are some who are doing that and we have a word for them, they are izinswelaboya [animal-like, pitiful things]. Sometimes I feel ashamed because even animals don't do things done by these people,” said the king.

The Ingonyama Trust has condemned a court bid to compel it to stop collecting rent from occupiers of land that falls under it as a "direct attack" on ...
News
2 years ago

The Zulu monarch did not specify how amakhosi and izinduna were abusing women.

But late last year, it emerged that the Ingonyama Trust Board (ITB) and traditional leaders were forcing women residents on land under its control to sign leases through male proxies, in effect removing their rights to own land.

The unlawful practice came to light in an application filed in the Pietermaritzburg High Court by the Legal Resources Centre, on behalf of the Council for the Advancement of the South African Constitution, the Rural Women’s Movement and seven informal land rights holders. They were challenging the conversion of informal land rights to long-term lease agreements.

Rural Women’s Movement chairperson Sizani Ngubane said in her affidavit that the rights of women were undermined by some amakhosi and the board, who demanded the leases be signed by a man.

“I have also heard of cases where the ITB or the inkosi insists that the lease must be in the name of whatever man they find on the property, because they assume that a man must always be the household head. This creates great difficulties if the man is just a boyfriend of the woman who owns and has established the property,’’ she said.

Ngubane said she had also come across a number of cases in which widows had been evicted from family homes by their sons, who had signed leases, and their wives, because of internal family disputes.

“The action of the ITB perpetuates the ideology of male dominance,” she said.

Zulu monarch King Goodwill Zwelithini has thrown down the gauntlet to the KwaZulu-Natal provincial government, stating that the sensitive issue of ...
Politics
2 years ago

King Goodwill Zwelithini prevented a potential war after a court application against the Ingonyama Trust.
Politics
2 years ago

Zulu king Goodwill Zwelithini's annual budget is set to be R75m during the 2021/22 financial year and it will increase slightly this year to R66m ...
Politics
2 years ago