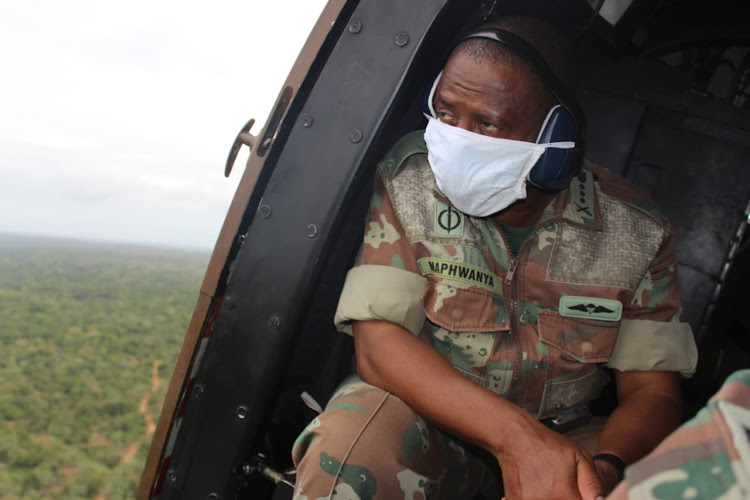 This was the main appointment in what amounts to a major military shake-up.

“With effect from June 1 2021, Lt-Gen Rudzani Maphwanya will assume the position of chief of the South African National Defence Force. Lt-Gen Maphwanya will be promoted to general upon his appointment and will serve in this position for five years,” said Ramaphosa, in his capacity as the commander-in-chief of the SANDF.

Maphwanya takes over from Gen Solly Zacharia Shoke, who retires at the end of May.

Ramaphosa said Maphwanya — who is a “highly decorated officer with vast operational experience” — began his military career in 1978 in uMkhonto weSizwe and, since 1994, has held numerous positions in the SANDF.

Ramaphosa said the Military Command was constituted by the chiefs of the armed services and divisions of the SANDF, including the army, navy, air force, and the military health services. It also has chiefs of joint operations, defence intelligence, logistics, human resources and chief of staff.

He further explained that all were commanders of their respective services and divisions.

“I have chosen to make a national announcement on these appointments as it is the most substantial change of command of the armed forces in several years,” said Ramaphosa, adding that this was aimed at achieving a “seamless and smooth” handover from one group of leaders to another.

He said the timing of the announcement was significant as the SANDF celebrates the anniversary of its formation in April.

The defence force's central mission is to protect citizens, defend the country as well as to provide peace and stability.

“Most recently, the SANDF has made a valuable contribution to the national response to the coronavirus pandemic, and continues to provide support as we strive to overcome this crisis,” he said.

Ramaphosa paid homage to outgoing SANDF chief Shoke for his “distinguished service” to the people of SA.

“A young activist of the 1976 generation, Gen Shoke became a combatant of uMkhonto weSizwe and commander in various roles, ultimately serving in the SANDF after the integration process in April 1994,” he said, adding that Shoke distinguished himself in the early days of integration as a major general and chief human resources support.

He then took over the reins as lieutenant-general and chief of the SA army until he was appointed as SANDF chief in 2011.

“He has led the Military Command of the SANDF over the years with distinction, and especially as the principal policy adviser to the minister of defence and military veterans. Since becoming president and commander-in-chief in 2018, I have admired and appreciated Gen Shoke’s professionalism, diligence and wise counsel,” said Ramaphosa.

The president  thanked outgoing chief and commander of the air force, Lt-Gen Zimpande Msimang, who retired in September 2020.

Other outgoing or resigned members of the Military Command include chief of defence intelligence, Lt-Gen Jeremiah Nyembe, and chief of the South African military health services, surgeon general Zola Dabula.

Along with Maphwanya, Ramaphosa appointed Maj-Gen Wiseman Simo Mbambo as the new chief of the South African Air Force.

“Maj-Gen Mbambo began his military career in uMkhonto weSizwe, where, among other things, he served as a training instructor in the Kibaxe Camp in Angola and was commander in charge of the former MK Military Aviation Group that underwent training in the Soviet Union from 1987 to 1991,” said Ramaphosa.

Mbambo served in several positions in the air force, including general officer commanding air force base Waterkloof and chief of staff air operations. He is now SANDF deputy chief of staff.

Maj-Gen Siphiwe Sangweni has been appointed the new chief of joint operations as of June 1 2021.

“The joint operations division is responsible for internal and external operations conducted by the SANDF and for the employment of joint forces,” said the president.

Sangweni began his military career in the underground structures of uMkhonto weSizwe before undergoing military training in Tanzania. He returned to SA in February 1994 as a platoon commander in the national peacekeeping force, before being integrated into the SANDF.

“He has served in numerous operational deployments, including as part of AU and UN missions in Burundi and the Democratic Republic of the Congo,” Ramaphosa said.

As of November 1 2021, Maj-Gen Ntshavheni Maphaha will take up the position of surgeon general, commanding  the military health service and plans and executives a health-care plan to a patient population of more than 300,000 people.

Maphaha began his professional career as a medical officer at Tshilidzini Hospital in Thohoyandou in 1992 and has held several positions within the military health service, including as the general officer commanding 1 Military Hospital from 2012 to May 2020.

Since June 2020, he has been serving as chief director of the military health force preparation.

Furthermore, Ramaphosa announced Maj-Gen Thalita Mxakato as not only the new chief of defence intelligence as of June 1, but that she will be the first woman to have a position on the Military Command.

“This is a significant — and long overdue — development in the ongoing effort to advance the position of women in our armed forces,” said Ramaphosa.

Her division, said Ramaphosa, provides combat-ready intelligence and counterintelligence capabilities for employment in operations or joint and multinational force preparations.

Mxakato joined uMkhonto weSizwe in 1983. She completed her basic training in Angola and specialisation training in Germany. She has served in the SANDF since its formation in 1994.

Ramaphosa said: “Before joining the defence intelligence division in 2003, she served in the South African Military Health Services and the Defence Inspectorate Division.”

Ramaphosa said upon taking up their positions, the three majors-general will be promoted to the rank of lieutenant-general.

“I am confident that under the leadership of these men and women, the SANDF will continue to fulfil its constitutional responsibility, to defend and protect the republic, its territorial integrity and its people,” said Ramaphosa.

'None of our business' how soldiers behave enforcing lockdown: ANC MP