'The Zondo commission report will be scathing of the ANC,' Cyril Ramaphosa warns party lekgotla 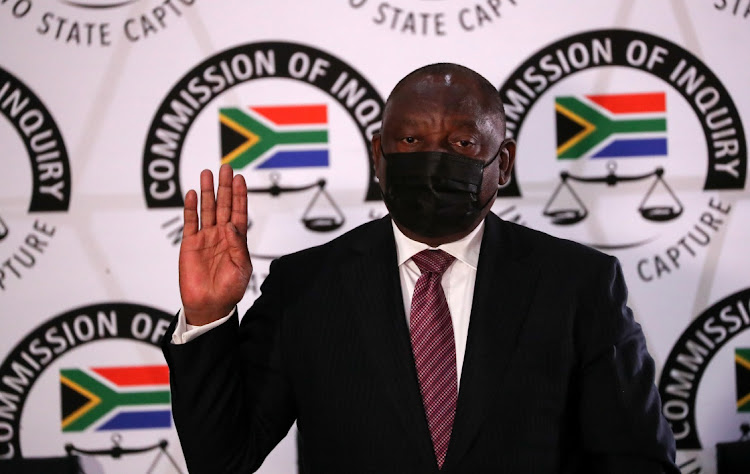 President Cyril Ramaphosa appears to testify before the Zondo commission of Inquiry into state capture in Johannesburg on August 11, 2021.
Image: REUTERS/SUMAYA HISHAM

President Cyril Ramaphosa has told the ANC NEC lekgotla that the party must be armed and ready to counter perception that his government is corrupt ahead of the release of the state capture commission of inquiry report next month.

Addressing the two-day Lekgotla, Ramaphosa said they are anticipating that the commission will be scathing of the ANC and its government, especially on its cadre deployment policy which came under the spotlight when he appeared before the commission as both president of the ANC and that of the country.

The commission of inquiry into allegations of state capture, dubbed the Zondo Commission, completed its work last month with its chairperson, acting chief justice Raymond Zondo, expected to finalise its report next month.

It heard gut-wrenching allegations of how businesspeople and government officials — deployees of the ANC - abused their power to enrich themselves and their cronies.

“The ANC and this government will be criticised in the main due to an exaggeration of the role of the deployment committee and misrepresentation of its ambit, as well as for the management of the work our MPs do in parliament and parliamentary structures,” Ramaphosa said.

“Specific allegations have been levelled against leaders and deployees of the movement and there is a concerted drive to tie these allegations to the organisation and portray a picture of a corrupt and incompetent ANC and ANC government.”

The ANC, according to Ramaphosa, must therefore arm itself with concise public messages to counter and act on the findings and recommendations of the Zondo Commission before the report is released in October which he said was likely to be made public.

The ANC NEC lekgotla is being attended by ANC leaders, ministers and their deputies, premiers and mayors.

“We need to be ready to address these and develop concise messages before the report comes out. An important issue will be to engage with and prepare ourselves for implementation of the recommendations,” he said.

Ramaphosa said that the ANC must not take for granted South Africans’ disappointment and unhappiness with the ANC government.

He said this in the context of the local government elections due to take place in October in which the ANC is at risk of losing several of its councils after failing to register candidates in 94 municipalities.

The party has also lost the confidence of South Africans who have grown tired of its corrupt nature, nepotism  and deployment of unskilled people leading to a failing service delivery system among other issues.

“Finally, there is a palpable feeling of anger towards and disillusionment with this government, which we must not underestimate. The people in this meeting bear the bulk of the responsibility for turning this around. It is our collective duty to address this,” he said.

Ramaphosa also told the NEC lekgotla that a lot more focus must be placed on creating employment opportunities especially for the youth and that it had become clear that the current government policies aimed at eradicating poverty and joblessness were inadequate.

“It is increasingly clear that our current economic policies, programmes and plans are not sufficient in scope and scale to answer the challenges represented by widespread poverty and unemployment. There are at least 11-million unemployed people in SA, a number that grows annually.

“Too many people live below the poverty line, regardless of what metric is used to measure poverty. This means that too many of our people go to bed hungry every day.”

The July unrest could also be attributed to this and it showed how the elite could easily exploit the economic and social conditions of the poor.

Sfiso Buthelezi is adamant: Popo Molefe is no victim of state capture

According to former Prasa board chair Sfiso Buthelezi in his final submission to the commission, there is compelling evidence that his successor Popo ...
Politics
8 months ago

A former director-general of the State Security Agency (SSA), Sonto-Gladys Kudjoe, is under investigation by the Hawks for alleged theft and/or ...
News
8 months ago

The state capture commission, its chairman Raymond Zondo, and the Council for the Advancement of the South African Constitution say international law ...
Politics
8 months ago