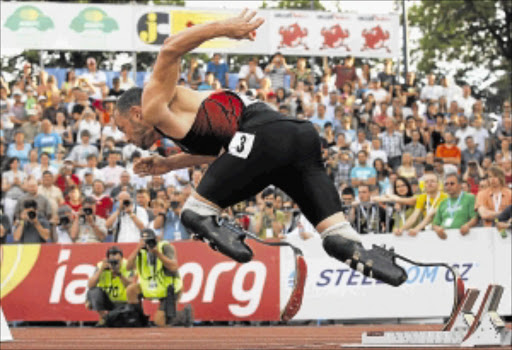 Oscar Pistorius competes in a 400m race earlier this year. He has achieved a qualifying time for next month's world championships but might not be selected Picture: GALLO IMAGES

Oscar Pistorius's dream of running against the best able-bodied sprinters of the world in Korea next month and at the London Olympics is still just that.

The "Blade Runner" finally nailed a world championship qualifying time on Tuesday night, clocking 45.07sec for the 400m at an athletics meeting in Lignano, Italy. It was half a second better than his personal best. He won by more than a second from Jamaicans Lanceford Spence and Michael Mason.

His chances of being chosen to represent South Africa at Daegu, South Korea, in the world championships next month have certainly been boosted - but his selection is not yet a done deal.

The president of Athletics South Africa, James Evans, explained yesterday that athletes had until early August to qualify and only the three fastest 400m runners could be selected.

Pistorius has the second-fastest South African time, after LJ van Zyl's 44.86, which makes him the sixth-fastest one-lapper in the world this year.

However, Van Zyl's speciality is the intermediate hurdles and he will not run in the 400m flat.

He will be in the mix for the 4x400m relay final, if South Africa qualify in Korea.

There are at least four rivals to Pistorius, but so far none has run as fast as him this year.

Even if Pistorius's Tuesday night time is overtaken by three of the four rivals, he could still be in contention for the relay. Because Van Zyl is expected to run only in the relay final, South Africa would need to find a fourth runner for the heats. But there would be a caveat.

"If Oscar runs in the relay, he will have to run in the first leg because the rest of the race is no lanes and there is the risk of him being bumped because it is a 'physical' race," said Evans.

Although Pistorius has run a qualifying time for the world championships, he might have to do so again to be considered for the Olympics in London next year.

"With regard to the Olympics, the agreement ASA has with Sascoc [South Africa's Olympic committee] is that the athletes will have to run the qualifying time twice," said Evans.

Yesterday, Pistorius was not dwelling on the difficulties, but celebrating his new PB.

"It was just a dream race," Pistorius told Reuters. "With 180m out, I just decided to set out for the end, and I really ran a very comfortable last 100m."

Pistorius's quest to qualify for the 2008 Beijing Olympics ultimately ended in failure despite winning his battle with the world body, the IAAF, over the use of the prosthetic running blades.