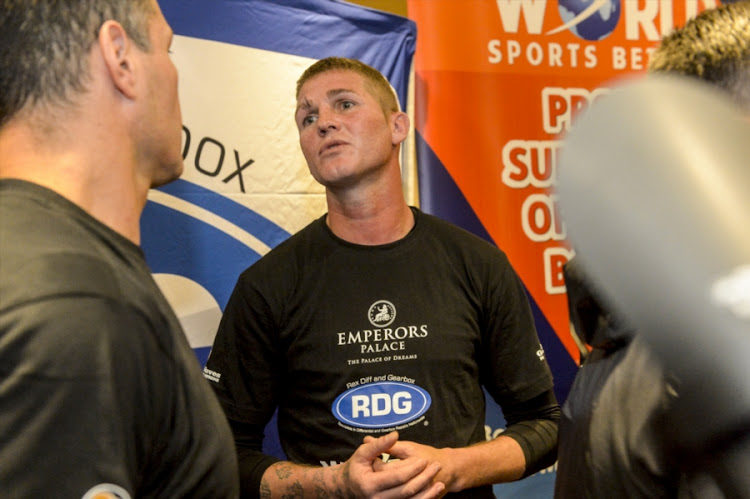 The pair top the Call to Glory bill at the casino on Saturday night.

The last time Oosthuizen appeared at a media function to announce the bout a few months back he called himself “the toughest f…ing guy around here” and spoke confidently of dispatching Mchunu and then Kevin Lerena.

Oosthuizen kept his talk clean and short. “I was ready [for the fight] last week‚” he said. “All the best to the Smith [Mchunu’s trainer Sean] and Thabiso.”

Smith the coach said it was an honour to “go to war against Harold”‚ referring to Oosthuizen’s trainer‚ 'The Hammer' Volbrecht‚ but he took a dig at the boxer.

“Throw the running shoes away‚ it’s time to go to war.”

His demeanour didn’t change when Smith’s father Kosie‚ the hard-hitting light-heavyweight star from the 1970s‚ interjected from the floor.

Oosthuizen also smiled at the banter between the other boxers on the undercard.

Ryno Liebenberg spoke of how he loves his super-middleweight opponent Alfonso Tissen; the pair have been sparring partners for years.

Tissen’s trainer Gert Strydom retorted: “We know what we’re up against. I respect Ryno … he’s going to try bliksem Alfonso. We’re going to bliksem you back.”

Both the Oothuizen-Mchunu and Liebenberg-Tissen contests are for African Boxing Union titles.

But there is also much interest in the undercard bout between former IBO featherweight champion Lusanda Komanisi‚ who moves up to lightweight to face Michael Mokoena after getting knocked out in his last outing a year ago.

Komanisi has stopped 18 of his 21 victims‚ but Mokoena doubted whether he’s going to carry that power up two divisions.

It all made Oosthuizen smile.

After the press conference‚ Oosthuizen‚ who’s been locked up a few times for various offences including drug possession and damaging his parents’ vehicle‚ afterwards hugged and kissed his father Charles‚ a top-level SA fighter in the 1980s.

He chatted casually with people and smiled a lot.

The smile‚ surely‚ will be gone by Saturday night.

Boxing champion Manelisi “Leli” Mbilase was stoned to death by community members in Mdantsane near East London after he was allegedly caught robbing ...
News
3 years ago