Phuzi wins easy on a day of roars and tears 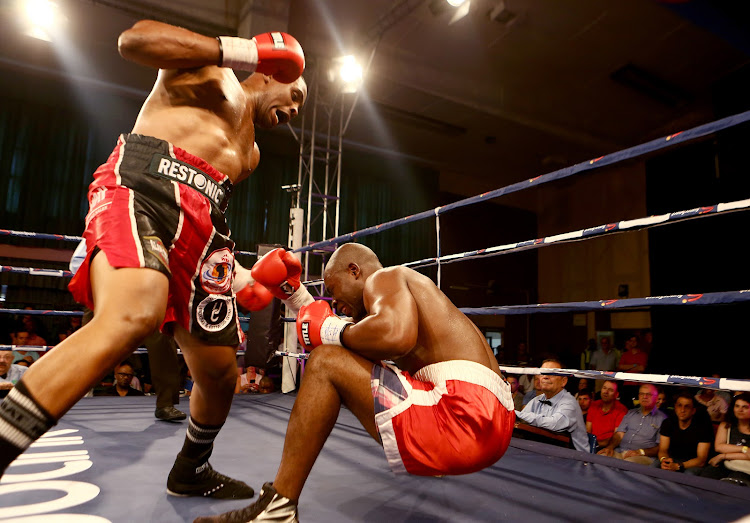 The Dragon roared and the junior-lightweight cried.

Such were the scenes at the Blairgowrie recreation centre in Randburg where cruiserweight Akani Phuzi made easy work of Malawian Mussa Ajibu in the main boxing bout on Sunday afternoon.

Justice Siliga edged Josh Pretorius on an eight-round split decision‚ but had the loser listened to the pleas of his cornerman‚ Stephen Castle‚ to double up on his jab‚ he might well have won.

He dropped Siliga with a peach of a left hook in the opening round before getting decked with a short right himself. In the second round he dropped Siliga again with a right hand.

His jab looked cleaner than Siliga’s. “Double! Double!” Castle shouted for most of the fight.

The last time the venue heard “double” being shouted with such gusto was when it used to stage duplicate bridge evenings; those old biddies could have shown Pretorius a thing or two or double.

The camp of Siliga‚ the No1 contender for the SA heavyweight title‚ has already lodged a challenge for the title held by Ruann “Giant King” Visser.

Wilhelm “The Dragon” Nebe literally roared like the Hulk moments after stopping Nhlanganipho Gwamanda in the first round‚ the massacre being halted after just 48 seconds.

That was his third professional fight and his third first-round stoppage; together he has fought a total of 149 seconds‚ which is 31 seconds short of a full round.

Later in the dressing room Nebe went up to his coach‚ Alan Toweel junior‚ and congratulated him on a good afternoon’s work.

The massive boxer with size 16 feet who has to box in takkies because he can’t get boxing boots his size in this country‚ was offered an impromptu sponsorship to get shoes.

But not all of Toweel’s boxers won on the day. Junior-lightweight Sifiso Hlongwane was beating Mziwodumo Mangsxilana before getting clocked in the fifth round.

Toweel was comforting him in the dressing room afterwards. “Don’t worry‚ I will bring you back. I promise you. You were winning the fight‚ but this is boxing …”

The loser was from Malawi and like his countryman in the main bout‚ he also survived only into the fourth round.

Phuzi looked slick against the elusive Ajibu‚ and if he showed any flaws‚ it was waiting too long in defence stance before offloading.

He needs to keep his opponents busier. He has a quick jab — he should use it more.

Phuzi improved his unbeaten record to eight wins‚ four inside in the distance.

It’s all part of the learning curve.

Nebe‚ a gigantic whirlwind of punches‚ insisted he had utilised what he’d learned in the gyym.

“Coach‚ did you see what I did there?” he asked excitedly.

“What exactly did you do?” I queried.

“The distance. I kept the right distance to land my punches.”

And when Nebe learns to throw straight punches instead of wild hooks and haymakers‚ he could be deadly.