Medvedev says new moustache might not last beyond Miami 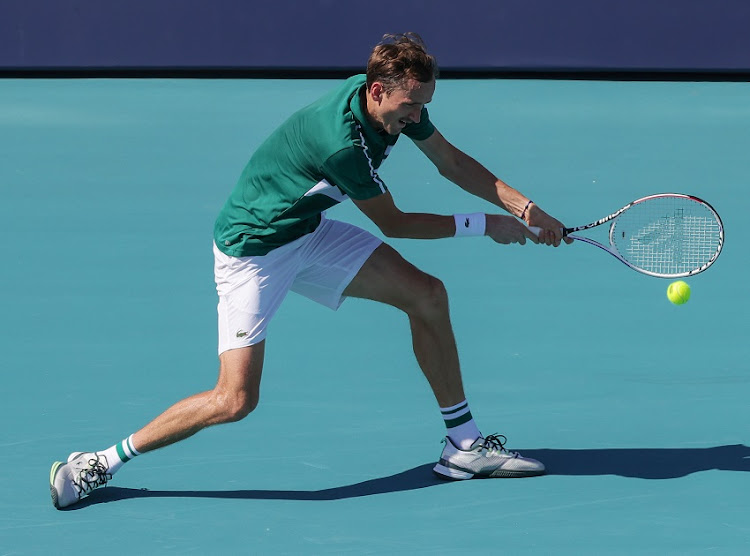 Daniil Medvedev of Russia returns a shot during his men's singles second round match against Yen-Hsun Lu of Taiwan on Day 5 of the 2021 Miami Open presented by Itaú at Hard Rock Stadium on March 26, 2021 in Miami Gardens, Florida.
Image: Mark Brown/Getty Images

The new world number two in men's tennis has a new look to go with his ranking, but Russian Daniil Medvedev is unsure of how long he will keep the moustache he's sporting at the Miami Open.

Medvedev replaced Rafa Nadal as No. 2 last week, becoming the first player outside the Spaniard, Roger Federer, Novak Djokovic and Andy Murray to be ranked in the top two since Lleyton Hewitt in July 2005.

He arrived in Florida with his new moustache for the ATP Masters 1000 event, having been made top seed after No.1 Djokovic pulled out to spend more time with his family.

"Last year in the beginning of the year I was doing a photo shoot and they were shaving me for the photo shoot, and they just left the moustache for a few minutes," Medvedev told reporters after Friday's win over Taiwan's Yen-Hsun Lu.

"I was, like, 'it's not too bad'. It was a little bit different because they had special shavers and stuff. So I think it was looking better. Since that time I always thought, 'okay, one day I'm just going to do it for fun for one tournament or something like this'.

"So probably after Miami I'm going to shave them off, but for this tournament it's going to be like this and let's see what people say."

Last month Medvedev reached his second major final at the Australian Open on the back of a 20-match winning run that saw him pick up trophies at the Paris Masters, ATP Finals and team-based ATP Cup.

After going down in straight sets to Djokovic in Melbourne, Medvedev suffered a shock loss at Rotterdam before winning his 10th Tour title in Marseille.

Medvedev is 15-2 for the season and only fellow Russian Andrey Rublev, who is also at a career-best ranking of eighth, has more wins in 2021.

"I think it's great for both of us that we are doing so good. Russian tennis is definitely on the rise right now, and I like it," Medvedev said.