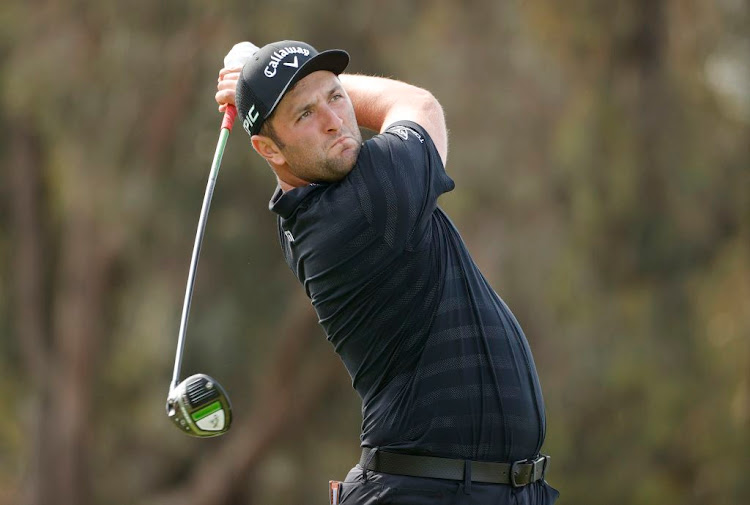 Jon Rahm fired a 12-under-par 61 on Saturday to storm into a tie with Cameron Smith atop the leaderboard heading into the final day of the Tournament of Champions in Kapalua, Hawaii.

Rahm matched the best score of his career and tied the course record set earlier in the day by Justin Thomas.

Rahm was 1 under after six holes before shooting 11-under par on the final 12 holes.

"You get on the birdie train," Rahm said, "and things like today can happen."

The splendid performance was only enough to force a tie with Smith, who entered the day with a three-stroke lead.

Smith shot a 9-under-par 64 for the second day in a row after shooting an 8-under-par 65 in the opening round.

Rahm praised Smith and said he believed both golfers pushed each other to their best performance in Round 3.

"We had a fun battle today and I'm guessing tomorrow's going to be more of the same," Rahm said.

"We're going to need a lot of birdies to get ahead and get the win."

Both Smith and Rahm are 26-under par through the first three rounds. They have a five-stroke cushion over Daniel Berger, who sits alone in third place at 21 under.

Next comes a three-way tie for fourth place between Matt Jones, Sungjae Im and Patrick Cantlay, all of whom are 20 under. Jones climbed the leaderboard by shooting an 11-under 62 on Saturday.

Smith said he savored the competition as he looks to win the tourney.

"It was really good fun out there today," Smith said. "Obviously playing nice golf helps. But watching Jon was pretty intense there on that back nine, some of the best golf I think I've ever seen, definitely some of the best putting.

"So, yeah, one more day. Hopefully we can do much of the same tomorrow and we'll see what happens."

Golf in 2021: Woods has close call, Mickelson and Morikawa rise to the occasion

Tiger Woods is no stranger to trials and tribulations and 2021 proved to be another test of his resolve after a serious car accident left the 15-time ...
Sport
2 weeks ago

Tatjana Schoenmaker is the queen of SA sport for 2021

No South African achieved more in sport this year than swimmer Tatjana Schoenmaker, who scooped two of the country's three Olympic medals at the ...
Sport
3 weeks ago

Tiger Woods has 'awesome' time in first round of PNC Championship

Tiger Woods and son Charlie are in the hunt after a strong showing during the first round of the PNC Championship.
Sport
4 weeks ago