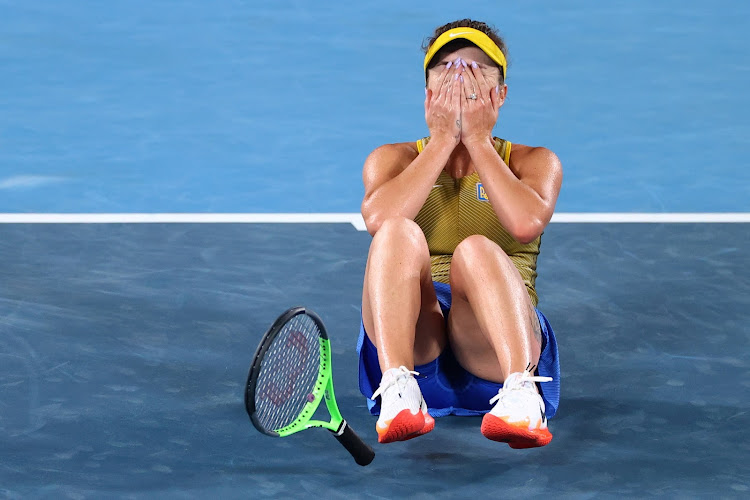 Elina Svitolina said Russian and Belarusian players who denounce Moscow's invasion of her country Ukraine should be allowed to participate at Wimbledon.

The grasscourt major announced on Wednesday that Russian and Belarusian competitors would be banned from this year's tournament.

The decision means that the likes of men's world number two Daniil Medvedev of Russia and women's fourth-ranked Aryna Sabalenka of Belarus are ruled out of the June 27 to July 10 tournament.

World number 25 Svitolina joined fellow Ukrainian players on Wednesday in seeking a ban on Russian and Belarusian athletes from international competitions but appeared to soften her stance in an interview with the BBC on Thursday.

"If players don't speak out against the Russian government then it is the right thing to ban them.

"We just want them to speak up, if they are with us and the rest of the world or the Russian government. This is for me the main point.

"If they didn't choose, didn't vote for this government, then it's fair they should be allowed to play and compete."

The governing bodies of men's and women's tennis criticised Wimbledon for its decision, while WTA founder Billie Jean King said that the Grand Slam's decision was a "complex undertaking" amid the challenges and pressures they were facing.

"One of the guiding principles of the founding of the WTA was that any girl in the world, if she was good enough, would have a place to compete," King said.

"I stood by that in 1973 and I stand by that today. I cannot support the banning of individual athletes from any tournament, simply because of their nationality."

Svitolina, who has friends and family still in Ukraine, said Russian and Belarusian players had to do more.

Medvedev made a plea for peace on Twitter in February while his compatriot Andrey Rublev wrote "No War Please" on the lens of a TV camera on his way to winning the Dubai title.

Rublev said he and other players participated in a call with Wimbledon officials about the decision but said the reasons they gave for making it "made no sense."

"What is happening now is complete discrimination against us," said Rublev, who is competing at the Serbian Open.

Svitolina said she could "count on one hand" how many Russian and Belarusian players who have asked her how she is doing and whether her family is safe.

"That's why I feel sad about this situation. Personally some people should do a bit more than they've done. It's mysterious.

"The way Russian and Belarusian players have been is very, sad. We're colleagues who see each other every week so it's shocking to see this change and so quick."

The Professional Tennis Players Association (PTPA), the breakaway players' body launched by Novak Djokovic in 2020, said that it was committed to protecting the tennis community having heard the experiences of individuals impacted by the war.

"As major competitions throughout our sport contemplate banning Russian and Belarusian athletes, we have to reflect and understand that many of them have lost their freedom of choice and expression, due to the laws being enforced by the Russian and Belarus Federations," the PTPA said in a statement.

"Speaking against Russian or Belarus or denouncing the invasion may result in imprisonment.

"The PTPA does not discriminate against any tennis player based on nationality, but we will stand against those who support, express or commit violence against the innocent."