Rahane and Kumar steer India to a comfortable lead 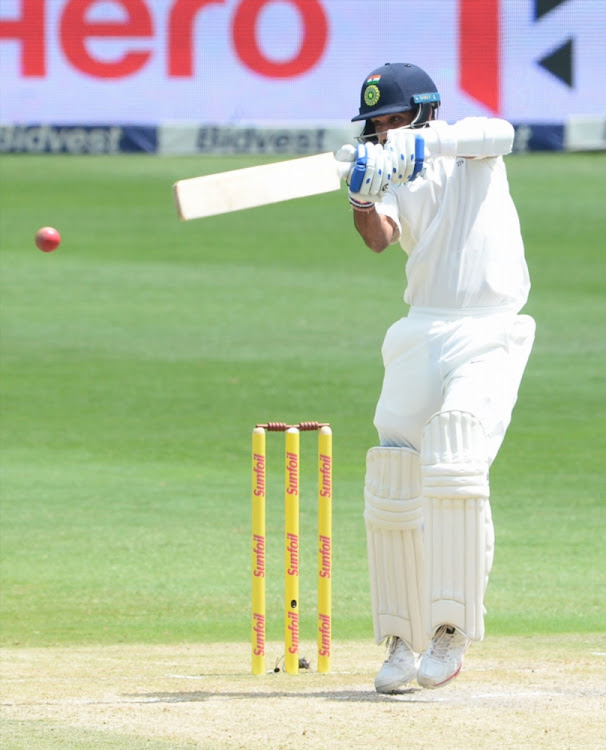 Bhuvneshwar Kumar of India during day 3 of the 3rd Sunfoil Test match between South Africa and India at Bidvest Wanderers Stadium on January 26, 2018 in Johannesburg.
Image: Lee Warren/Gallo Images

India reached tea on day three of the third Test against India at the Wanderers on Friday on 199/6 and a comfortable second innings lead of 192 runs after South Africa dropped two routine catches in the session.

India resume in the third and final session with Rahane (46) and Kumar (23) looking to build on their promising partnership of 51 off 71 balls.

When they returned from lunch‚ South Africa got the breakthrough when Kagiso Rabada produced a brilliant delivery that pitched on a good length to crush the top of Kohli’s off-stump‚ who had to walk back to the pavilion having scored 41 runs off 79 balls.

Kohli‚ who has overtaken MS Dhoni as India’s highest run-scorer as Test captain‚ played an exceptional knock as he left dangerous balls‚ defended well and punished loose balls on this Wanderers pitch that was extremely difficult to bat on.

He has finished the series on 286 runs after six innings with the highest score of 153‚ achieved in Centurion in the second Test.

Rabada got his third of the day when he caught and bowled a careless Hardik Pandya and later Morne Morkel could have pocketed his second of the day but Dean Elgar missed a sitter at slips after Kumar thick-edged the ball on 15 runs.

In the 58th over umpires Ian Gould and Aleem Dar converged for a brief chat in the middle after the ball from Rabada bounced alarmingly to hit Rahane on the hand‚ but ordered play to continue.

In the first session‚ Vernon Philander removed KL Rahul‚ Cheteshwar Pujara was a victim of Morkel and Rababa accounted for Murali Vijay with a properly executed yorker.

Wanderers pitch 'one of the toughest I've played on'‚ says Amla

Hashim Amla believes that the third test between South Africa and India at the Wanderers Stadium in Johannesburg is evenly balanced and anything can ...
Sport
3 years ago

India reached stumps on the second day of the third and final Test at the Wanderers on 49/1 and leading South Africa by 42 runs and with nine ...
Sport
3 years ago

From night to morning‚ and beyond‚ with Kagiso Rabada

Kagiso Rabada did the unthinkable as the morning drinks break loomed at the Wanderers on Thursday.
Sport
3 years ago