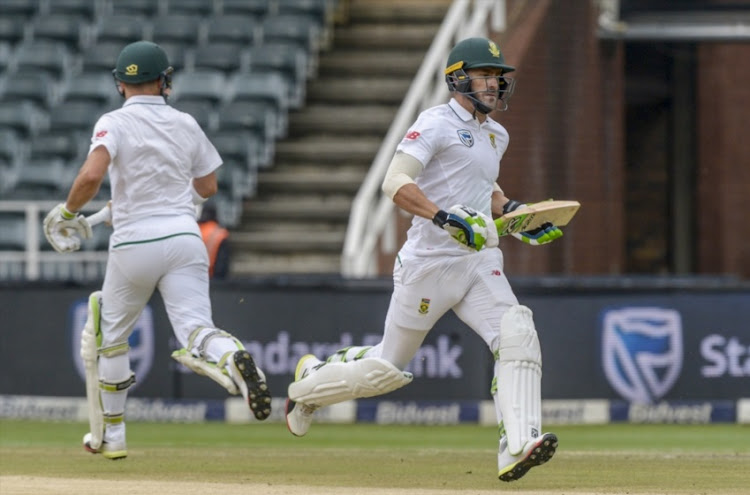 Proteas captain Faf du Plessis showed bravery to continue batting after he was hit by a full length ball from Pat Cummins on his index finger as South Africa increased their advantage during the first session of the fourth Test  at the Wanderers on Monday.

When lunch was called‚ South Africa were in the driving seat on 202/3 with Du Plessis and Elgar on respective scores of 81 and 59 and enjoying an overall lead of 469.

They have all but shut out a fragile Australian side that is without banned Steve Smith‚ David Warner and Cameron Bancroft.

In the session‚ Elgar and Du Plessis added 68 runs to South Africa’s overnight score of 134/3 and they also added 20 and 47 runs to their individual scores.

During their dominant session‚ Du Plessis registered his 18th Test half century while Elgar clocked his 12th as they continued to frustrate the Australian bowlers with a strong partnership of 108.

In the 62nd over‚ Du Plessis was beaten by Pat Cummins’ extra bounce with the ball crushing his gloves to leave him in agony and a bloodied finger.

But he showed bravery to continue batting after lengthy medical attention.

There was a sense around the Bullring that Du Plessis should have retired to save himself for fielding later because South Africa still had recognised batsmen in the form of Temba Bavuma‚ Quinton de Kock‚ Vernon Philander and the rest of the tail Keshav Maharaj‚ Kagiso Rabada and Morne Morkel in the bank.

If the injury proves to be serious‚ Du Plessis may miss the Indian Premier League (IPL) where he turns out for the Chennai Super Kings.

He is set to earn a reported R2.9m for two month’s work and he will be team-mates with Imran Tahir and Lungi Ngidi.

The start of day four was delayed for about fifteen minutes due to bad light.

The match was interrupted later for sixteen minutes when umpires called the players off as light had deteriorated.