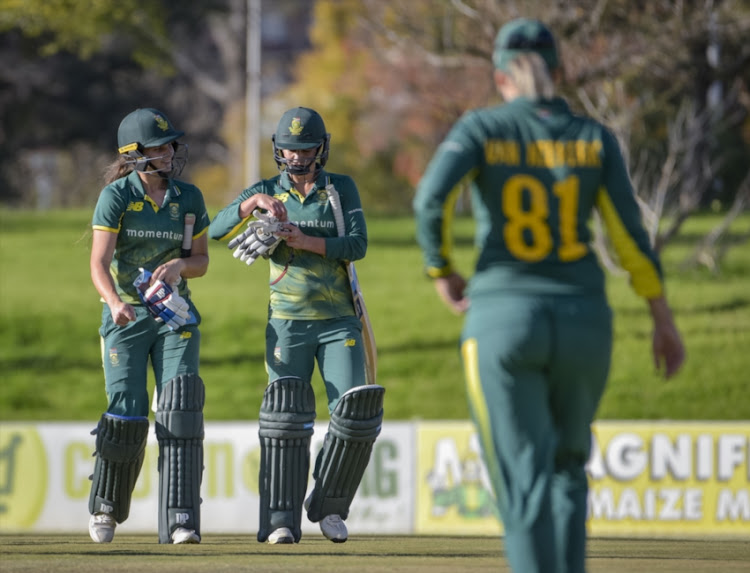 Laura Wolvaardt and Marizanne Kapp of South Africa after the winning runs during the 5th Womens ODI match between South Africa and Bangladesh at Mangaung Oval on May 14, 2018 in Bloemfontein, South Africa.
Image: Frikkie Kapp/Gallo Images

Senior Protea women’s all-rounder Marizanne Kapp said how they pace themselves through the ICC Women’s T20 World Cup in the West Indies will go a long way in determining their progress in the tournament.

While the World Cup starts on Friday when hosts West Indies face off against Bangladesh at the Providence Stadium in Guyana‚ South Africa’s tournament starts at 2 am SA time next Tuesday morning when they face Sri Lanka at the Darren Sammy National Cricket Stadium in St Lucia.

South Africa’s warm-up matches ahead of their serious engagements next week haven’t quite gone according to plan.

A 90-run loss to Pakistan in Coolidge on November 3 sat alongside a three-run loss to India at the Sir Vivian Richards Stadium in North Sound. Kapp wasn’t too concerned about their pre-tournament stutters.

“We’re still positive and we would have liked to win every single game but I’m a believer in peaking at the right time. I’ve seen with the teams [Sydney Sixers and Surrey Stars] that I’ve played for at other levels that the years where we won trophies were the years when we didn’t start very well‚” Kapp said.

“People said we should go back to the drawing board and start again next year and we ended up winning tournaments. It’s not about how you start but how you finish.”

South Africa have a tough assignment against one of the tournament favourites‚ Australia‚ on Wednesday in Guyana.

Kapp said they needed to execute better but improvement is their ultimate end goal ahead of next week’s opener.

“It’s been a case of wrong choices and wrong execution at some stages rather than anything else‚” she said.

“It’s just about everything coming together on the same day and everyone performing on the day.

“We’d like to end off well and win the game. Even if that doesn’t happen‚ it’s not the end of the world.

“So long as we keep on improving with each game‚ we should be fine when the first game starts against Sri Lanka.”