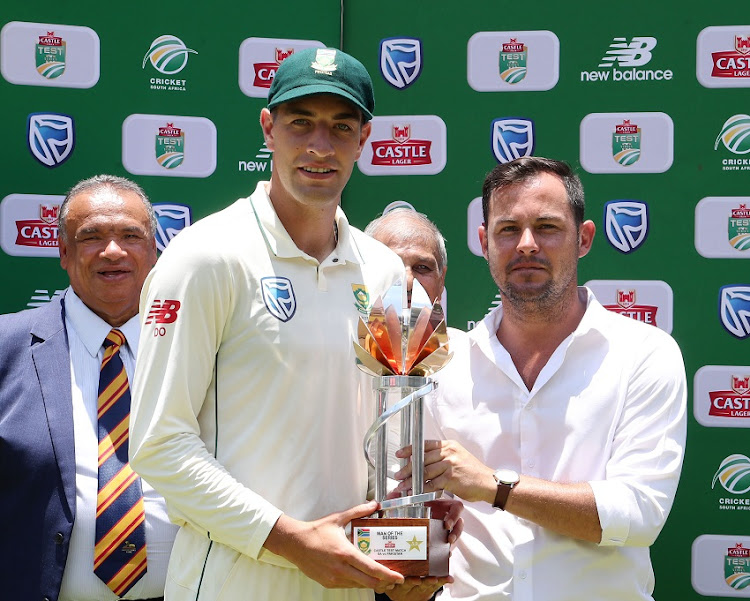 Man of the Series Duanne Olivier of South Africa during the 2018/19 Castle Lager 3rd Test Series match between South Africa and Pakistan at the Wanderers Stadium, Johannesburg on 14 January 2019.
Image: ©Muzi Ntombela/BackpagePix

Before the start of the Test series in which they got whitewashed‚ the most pressing question facing Pakistan was whether their batsmen would cope with the pace and bounce of the South African surfaces.

The tourists arrived with an attack capable of asking uncomfortable questions‚ but their batters were always going to be put through full interrogation from the South African speedsters.

With that in mind‚ Pakistan set up camp in Benoni before the start of the series in an attempt to properly acclimatise their batsmen.

There they spent much time on the back foot and swaying out of the way trying to improve their technique.

It was soon apparent once the Test series got underway that nothing was going to prepare them adequately for the force that is Duanne Olivier.

He came into the series with nothing to lose‚ but much to gain.

To unclutter his mind Olivier was told he could focus on bowling two lengths – one full and the other very much aimed at imperilling the batsmen.

Unshackled by the South African brains trust and on surfaces that at times produced variable bounce‚ Olivier seamlessly slipped into a role captain Faf du Plessis after the first Test would refer to as ‘the team’s enforcer’.

On Monday stand in skipper Dean Elgar referred to him as the ‘Bloem bone collector.’

He kept Pakistan’s batsmen on their toes the entire series and their inability to deal with the ball aimed at the throat served to suffocate the life out of their challenge.

Olivier is aggressive and uncomplicated. He wears a bedraggled look. He walks back to his mark as if he is dragging a bag containing the bones of his victims.

That bag quickly bulged and got heavier as the series wore on.

He didn’t so much knock as kick the door down at the start of the series by grabbing 11 wickets at Centurion and added five more at Newlands.

His five-wicket haul in the first innings of this Test‚ brought him within shot of a record that has endured 117 years.

By the start of Pakistan’s second innings Olivier was within four wickets of equalling Charlie Llewellyn’s record of 25 wickets in a three-Test series against Australia in the 1901/02 season.

When Llewellyn got those wickets‚ WG Grace was still rapaciously piling on the misery for the bowlers at first-class level and the second Anglo Boer War was edging towards conclusion.

Olivier bowled six overs at the start of the morning on Monday and although he took two wickets he fell one short of Llewellyn’s mark by the time he was removed from the attack.

He was reintroduced to the attack in the 65th over but failed to claim the final wicket.

Still‚ his wicket-taking feats in the series proved timely.

With Dale Steyn and Vernon Philander only returning from injury before and during the series respectively‚ and Lungi Ngidi still convalescing‚ someone had to take a load off Kagiso Rabada’s young shoulders.

The man of the series did just that‚ and dragged a heavy bag along the way.