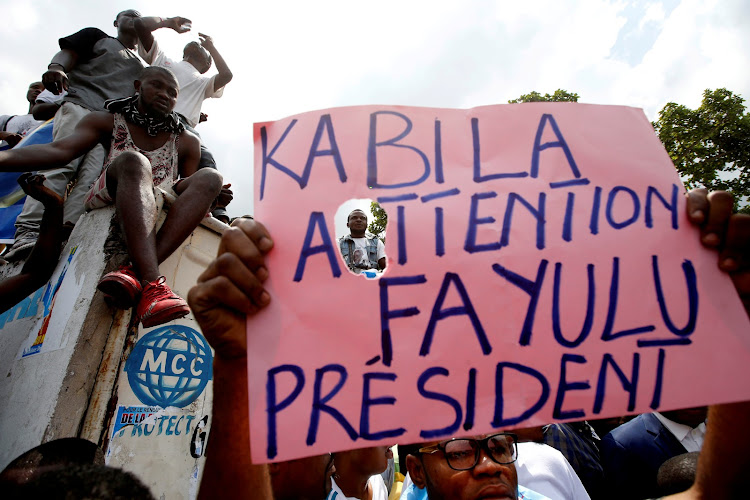 Supporters of the runner-up in DRC's presidential election, Martin Fayulu, hold a sign before a political rally in Kinshasa on January 11 2019.
Image: Reuters/Baz Ratner

Seeing the people of the Democratic Republic of Congo, his home country, cast their votes in December 2018 was a "blessing" for Michel Matamba, who fled the country after being forced to join the army.

Matamba, 36, lives in Randburg, Johannesburg. He has been living in SA since 2009.

When he got to the village where he was to receive training for the army, Matamba said, he decided to flee.

"There was not even proper training. It was just one week of being taught how to handle a gun. I fled from the training. I walked until I saw a train and jumped into it, not knowing where I was going.

"I landed in Zambia, a country I was familiar with because I used to travel between Congo and Zambia," Matamba said.

International relations minister Lindiwe Sisulu has commended the people of the Democratic Republic of Congo (DRC) for holding peaceful elections in ...
News
2 years ago

He spent a week in Zambia before getting a lift with a truck driver to SA.

"When I came to South Africa, I could not speak English or any local language. I learned English on the streets."

Matamba said he struggled to get a job as a foreigner who could not communicate in any of the local languages. "I struggled until I got odd jobs. It was only in 2017 that I got a decent job."

The elections that took place in December in the DRC are a blessing for the country and its people, who have not had the opportunity in the past to cast their votes, Matamba said.

The country’s provisional results released last week Thursday declared Felix Tshisekedi the winner with 38.57% of the vote, just ahead of Martin Fayulu with 34.8%. Emmanuel Ramazani Shadary, the candidate backed by outgoing president Joseph Kabila, came a distant third with 23.8%.

Fayulu, however, announced on Friday that he would appeal to the country's constitutional court for a recount as his bloc claimed he had won the poll with 61% of the vote.

Democratic Republic of Congo (DRC) should recount the votes of its contested presidential election that the runner-up says was rigged, the SA ...
News
2 years ago

"I am happy that my people finally went to the polls. I have never seen any elections in the country since I was born. When the date was finally announced, I was very excited. I am proud of my country and my people," Matamba said.

He said Kabila’s time to step down as president was long overdue.

"He messed up that country. I am not even sure that I would still be alive had I stayed on in Congo."

Despite being hopeful for his country and his people post-elections, Matamba has no intention of going back.

"I can only go there to visit my family and come back. There is still a lot that needs to be done. Our people are suffering. They need jobs."

Opposition candidate Felix Tshisekedi has come out on top in the DRC's much anticipated elections, with the surprise results sparking mixed reactions ...
News
2 years ago

Democratic Republic of Congo's Catholic Church said that election results tallied by its observers do not match official results announced by the ...
News
2 years ago

Democratic Republic of Congo's (DRC's) government cut internet connections and SMS services across the country for a second straight day on Tuesday ...
News
2 years ago