Boks ease to victory over Wales 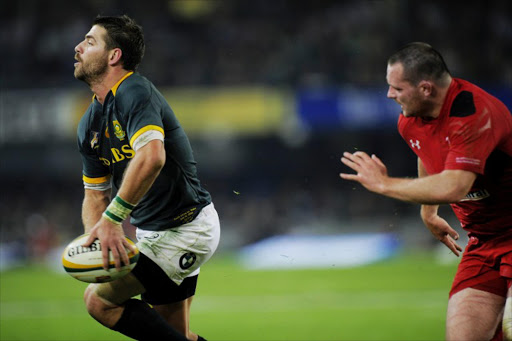 Willie le Roux scored a fine solo try and had a hand in three others as the Springboks eased to a 38-16 victory over Wales in the opening Test match at Kings Park in Durban on Saturday.

The Cheetahs fullback set up two Bryan Habana scores and also played in franchise teammate Cornal Hendricks for a try on debut.

Duane Vermeulen scored the other try in a one-sided affair, ensuring the hosts started their Test season on a high.

Heyneke Meyer's men, dogged by off-field problems in the build-up, showed little sign of distraction apart from the opening three minutes when Wales twice delivered threatening runs on either wing and came away with a Dan Biggar drop goal.

But South Africa settled in thereafter and hit back with a wave of phases, although they were hampered metres from the line as the visiting defence cleared.

However, there was no stopping France-based Habana when he sharply chased down Le Roux's kick-ahead to touch down on the left after seven minutes -- the veteran winger showing a good burst of speed to beat Alex Cuthbert after flyhalf Morne Steyn's initial quick ball allowed the fullback to run into space.

Wales then lost Jamie Roberts to a yellow card after the star centre tackled Le Roux in the air.

And the Boks took full advantage by scoring twice in that 10-minute passage.

First Stormers flanker Vermeulen crashed over, collecting quick ball from Fourie du Preez, after a drive from an attacking line-out was held up. Le Roux's brilliant shimmy then opened up space for Habana to latch onto his pass and skip over for his 55th Test try.

In between those scores, Bigger had popped over another drop kick when French referee Romain Poite was playing advantage.

Le Roux then scored an outstanding solo try, chipping ahead from inside the 22 and regathering after the bounce fell kindly for him and not opposite number Liam Williams, and diving over for the fourth try two minutes from the break.

Although Biggar added a penalty before the changeover, the lead was still a substantial 19 points.

That was stretched to 22 five minutes into the second half when Steyn, who kicked six out of six attempts on goal, slotted over a penalty.

Hendricks scored a fifth try of the night when the ball was rapidly switched from left to right, Le Roux drawing men once again, as the ball was sent wide to the former to cross.

The Welsh, who scored a disallowed try for a forward pass on the hour, finally managed a five-pointer with 10 minutes to play as Cuthbert ran from inside his own 22, brushed off three tackles and ran in under the post.

It was nothing more than consolation, though, as the Boks took a 1-0 lead in the two-game series.