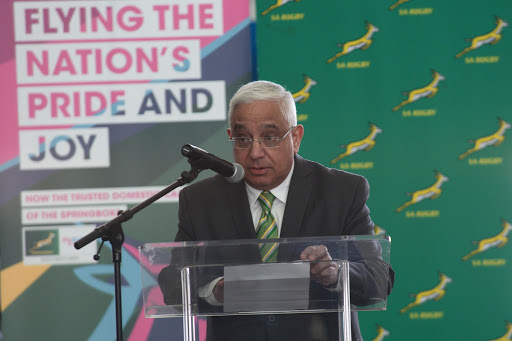 South Africa should and will not get hosting rights for the 2023 Rugby World Cup because it's perceived to be our turn‚ or because of sympathy‚” SA Rugby president Mark Alexander insisted on Tuesday.

“We can't say it's our turn‚” Alexander said about the notion that it's been 22 years since the country last staged the event.

“People must vote on our value proposition. They must look at our technical ability‚” he insisted.

He believes South Africa's bid will rake in more proceeds than other bid countries France and Ireland. Staging the event in those countries‚ he stressed‚ will be costly.

“We can deliver the most affordable Rugby World Cup and that's why it will be the preferred choice when World Rugby decides in November.

It does not concern him that the bulk of the travelling fans would have to travel greater distances to get to South Africa.

“It will be more affordable here. What you spend in one week in a hotel in Europe‚ you can spend over three weeks here.

“This is not just about SA Rugby‚ but tourism. We can't just look at it as a big pay day.

"It is a big boost to our economy. As much as 6.9 percent of our GDP comes from tourism and a large chunk of that is sports tourism.”

He cautioned that while the bulk of the proposed infrastructure is already in place it is imperative South Africa secures the rights to this event.

“We don't have to build projects. What we show them today we'll have then. The pitches‚ however‚ will all be upgraded. If we stage a later event we will however have to spend large amounts on infrastructure.”

He rattled off the numbers‚ suggesting the event can rake in R27.3 billion and that it would create 38 600 temporary or permanent jobs.

“This is a momentous day for South African rugby and in November‚ when the decision is made‚ we hope it will ignite the beginning of a six-year journey to a climatic conclusion at the National Stadium in Johannesburg in front of 84 373 spectators in the biggest and most spectacular Rugby World Cup final there has ever been‚” said an unusually upbeat Roux in a press release.

“South Africa has the hunger and capacity to host this tournament like no other country on earth‚” a chipper Roux continued‚ although it is difficult to imagine how he measured that.

“We believe we have submitted the strongest technical bid supported by world-class venues and outstanding training facilities in an ideal climate against a stunning African backdrop.

“Players will be able to perform in the ideal conditions of a dry and sunny South African spring‚ offering an unforgettable playing experience for players.”

Roux said that the combination of infrastructure‚ environment and climate would allow the sport to showcase the very best it has to offer‚ inspiring South Africa‚ Africa and the world.