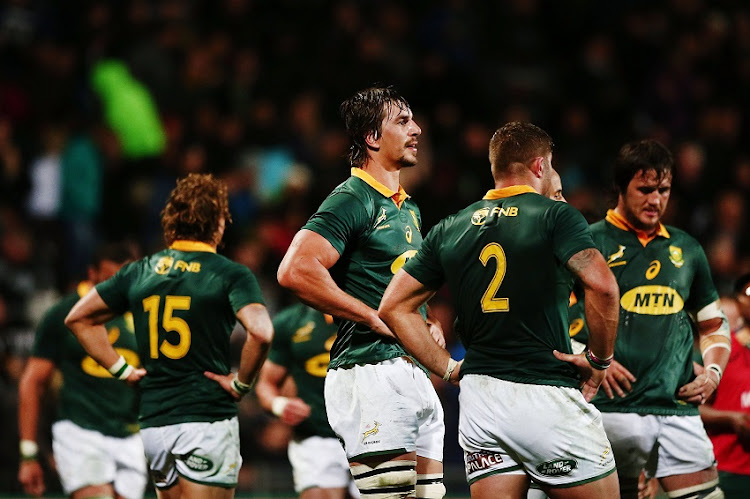 Eben Etzebeth of South Africa looks on during the Rugby Championship match between the New Zealand All Blacks and the South African Springboks at QBE Stadium on September 16, 2017 in Auckland, New Zealand.
Image: GETTY IMAGES

He now stands alone as the captain who presided over the Springboks' record 57-0 defeat at the hands of the All Blacks.

As part of the Stormers Super Rugby unit that was repeatedly manhandled by the Crusaders (57-24)‚ Highlanders (57-14) and the Highlanders (41-22)‚ Etzebeth could and should have had an idea that a hiding of this nature was lurking ominously around the corner at the highest level.

With the All Blacks going into the game on the back of considerable pressure despite a run of three wins and a draw‚ they needed to re-affirm their position as the best side in the world and the Boks just happened to be ripe for the picking.

The Boks were cock-a-hoop on the back of five wins and a draw in 2017.

They hit the ground with a seismic effect that was felt halfway across the world.

Corne Krige (twice)‚ John Smit and Adriaan Strauss can now rest easy as the mantle has been wrested from them by Etzebeth.

Such was New Zealand's domination‚ Etzebeth could only watch in horror as Malcolm Marx's throwing went to pieces in the face of a calculating performance by All Black captain Kieran Read‚ Sam Whitelock and Brodie Retallick.

Springboks' performance against All Blacks shameful

Etzebeth was quick to admit the All Blacks were the better side on the night and full value for eight tries that contributed to the unceremonious and historic routing.

“It's tough and I told the players we can't go on like this and we are disappointed.

"We're going back to South Africa where we'll be facing Australia in Bloemfontein and New Zealand in Cape Town.

“It's going to be very hard to pick ourselves up but I trust in the guys‚ in the management and I know the guys can bounce back.”

Read's in a better position than Sean Fitzpatrick and Reuben Thorne‚ the two other All Black captains who put 50 points past the Boks in 1997 and 2003.

The result probably served to extend the gulf between the teams‚ especially with the crest the Boks were riding in the lead up to the game.

Read was his usual magnanimous self‚ saying the Boks asked serious questions of them before their unexpected capitulation.

“The Boks threw everything at us and the first half went by very quickly‚" Read said.

"It was a pretty intense half of footy.

"I didn't (know) by how many points we were up.

"It was tit for tat‚ but we got four opportunities and we took all four of them.

"Maybe that was the difference but our defence really stayed strong and the fact we didn't let them in during the second half was credit to our composure.” - TimesLIVE