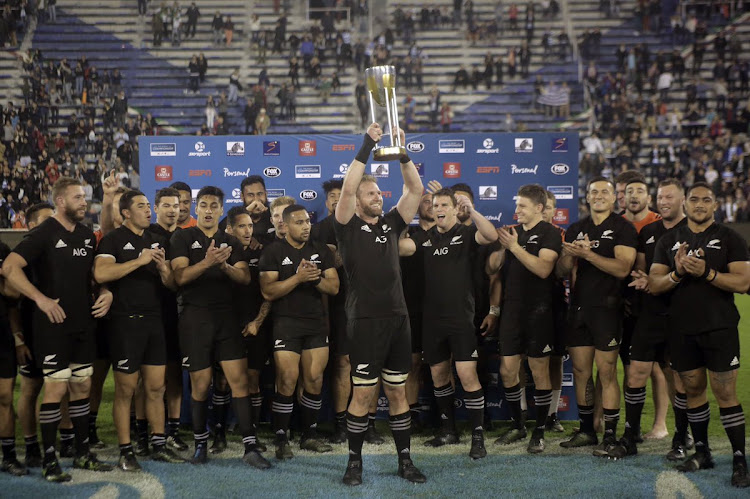 New Zealand players celebrate after winning their penultimate Rugby Championship match against Argentina to clinch the title.
Image: All Blacks/Twitter

New Zealand won 12 of their 14 games, secured the Rugby Championship for the fourth year in a row and Bledisloe Cup for the 16th, yet 2018 was the year when people began to think the mighty All Blacks might be vulnerable.

Such is the dominance of the back-to-back world champions, still clearly ranked number one, that rivals are forced to seize on the slightest chink in their armour to build belief they are beatable in next year's World Cup.

That crack, initially exposed by the British and Irish Lions in 2017, reappeared against a resurgent South Africa this year, in a 36-34 defeat in Wellington and in Pretoria when only a superb late fightback earned New Zealand a 32-30 victory.

The All Blacks also needed a controversial TMO intervention to scrape a one-point win over England before the game that really buoyed the rest of the world, when Ireland beat them in Dublin for the first time.

What made that 16-9 victory so much of an eye opener was that it was not any smash and grab affair or something achieved after an hour of heroic defence, but a controlled and deserved triumph in which Ireland looked the better team for most of the match and played as if they expected, rather than hoped, to win.

Eben Etzebeth looks set to be at the centre of a battle between Western Province and French club Toulon after the latter announced last week that the ...
Sport
3 years ago

It was the first time since 1995 that the All Blacks had failed to score a try against a northern hemisphere team and, in the face of the rush defence masterminded by Andy Farrell, superstars like Beauden Barrett suddenly looked distinctly human.

"I think Ireland’s success against the All Blacks has been a positive for the whole world - they’re not invincible,” said former Ireland captain Brian O'Driscoll.

“If teams get their act together and perform well against the All Blacks they are not the team they were in 2015 when they won the World Cup. They’ve not got the same quality in certain positions."

New Zealand have not dominated the game for a century without learning lessons from defeat, however, and they will no doubt return refreshed and tactically invigorated for World Cup year when they will head to Japan as favourites.

But that Dublin victory capped an incredible 2018 for Ireland and coach Joe Schmidt, who will stand down after the World Cup. They began with a Six Nations Grand Slam, beat Australia 2-1 in an away series and won all their November tests.

Those achievements were recognised in the World Rugby awards where they were named team of the year, Schmidt coach of the year and flyhalf Johnny Sexton player of the year.

With a settled squad and domestic system geared to support the national team they head into 2019 - where they begin their Six Nations defence at home to England - full of optimism and confidence.

Other than Italy they remain the only Six Nations team never to have reached the World Cup semi-finals but to do so they will almost certainly need to beat South Africa or New Zealand in the last eight.

Ireland were undoubtedly the team of the year but, such are the slim margins of elite sport, it should not be forgotten that they needed a last-gasp Sexton drop goal to snatch victory in Paris in their opening Six Nations game.

That marked the start of another poor year for France which ended with an ignominious home defeat by Fiji.

A 2-1 series loss in South Africa followed but an encouraging November, including wins over the Springboks and, for the sixth time in a row, Australia ensured they finished the year in a positive state of mind.

The northern hemisphere sides generally did well in those November matches, not least Wales.

Traditionally poor at the end of the year, they won all four, including a first victory in 14 against Australia, to take their winning run to nine.

The Wallabies had a poor year, losing nine of their 13 matches, but defiant coach Michael Cheika said they would be right back in the World Cup mix and, given their remarkable record in the tournament, they probably will be.

South Africa will also head into 2019 in buoyant mood after new coach Rassie Erasmus brought pride back into the jersey.

True, the Springboks won only seven of their 14 games but their performances against New Zealand in particular reminded everyone just what a fearsomely aggressive outfit they can be.

Perhaps of even greater importance, given the quota system the team must operate under, was the appointment of Siya Kolisi as their first test-level black captain.