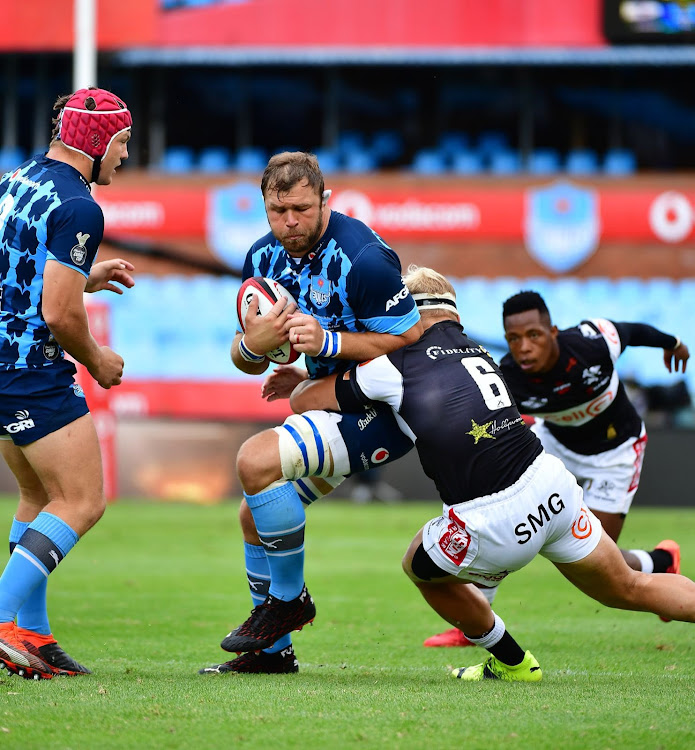 The Cell C Sharks looked tired towards the end of the match.
Image: The Vodacom Blue Bulls/Twitter

The heartbreak was palpable after the Sharks came tantalisingly close to upstaging the Blue Bulls again in a Currie Cup final at Loftus.

They had bossed much of the contest and were in the pound seats at 19-9 before the Bulls bench and their own growing fatigue swung the match.

The Bulls forced extra-time by tying the score 19-all before Arno Botha scored the decisive try.

It would have been like a dagger through the heart for the Sharks who had knocked the Bulls out of their stride.

They had scrapped‚ hurried and harassed their opponents‚ displaying urgency in defence that the Bulls' director of rugby Jake White described as the best line speed in the competition.

“The players are gutted and I am gutted for them having fought for 100 minutes‚” said Sharks coach Sean Everitt.

“It was probably a game that we let slip.”

The Sharks fell off towards the end as the combined effects of fatigue due to the length of the game and the altitude took it's toll.

Where they were fastidious in guarding their defensive lines‚ they backed off as the desperate but resurgent Bulls made breaches.

“The guys were tired. I thought they did very well keeping the Bulls out for so long‚” noted Everitt.

It is incontestable that the Sharks could have been out of sight by the time the Bulls were re-energised.

Normally reliable flyhalf Curwin Bosch missed five penalty attempts and they eschewed opportunities at goal in the second half by kicking for touch instead.

But Everitt was having none of it.

“The players on the field have a feel for the game‚” he said about opting to kick for touch.

"If one scores a try we would not be having this conversation. To take the score to 22-9 is probably a conservative way to look at it‚ but probably the right way.

“Last week the players went for the corner against Western Province‚ we scored a try and no-one questioned it. It wasn't just one isolated moment. There were more.

“If the players felt that was the right decision‚ I back the players.”

In that regard he backed captain Lukhanyo Am.

“He has been exceptional in tough times‚” said Everitt.

“I'm not disappointed he didn't kick everything over. He has done it time and time again.

"It's like golfers who have a bad day and [on Saturday] he maybe wasn't up to the standard that we are used to.

“That guy has been amazing‚ pulling us out of the trenches‚ but unfortunately it didn't go for him [on Saturday]. Morne Steyn missed one and Chris Smith missed one after 80 minutes.

"We could look at all the kickers in that regard. When you miss kicks at goal‚ it doesn't make you a bad rugby player‚” Everitt reminded.

While the Sharks would have left Loftus with a sense of what could have been‚ they can now rest and approach the upcoming season with renewed vigour.

“I told the players you can't base the success of a season on one game. So much has happened since the start of 2020 and at the end of January 2021‚” Everitt said sagely.

“New players have been given an opportunity and some have done exceptionally well.

"The players have grown as a squad‚ the leadership has grown‚ players have matured‚ the culture in our squad has grown. There is a lot of success that has happened.

“Everybody wrote us off in the semi-final and then we push the Bulls in the final to the 100th minute. I'm proud of the guys. Was the season a success? Yes‚ it definitely was.”

Bulls win a Currie Cup final for the ages, lifting trophy against the Sharks

This, for reasons obvious and slightly obscure, was a final for the ages. It had everything.
Sport
1 year ago

Five key areas and match-ups that may determine the result of Saturday’s Currie Cup final between the Blue Bulls and the Sharks at Loftus Versfeld ...
Sport
1 year ago

This year’s tour, which been many years in the planning, is under threat from the spiraling Covid pandemic
Sport
1 year ago