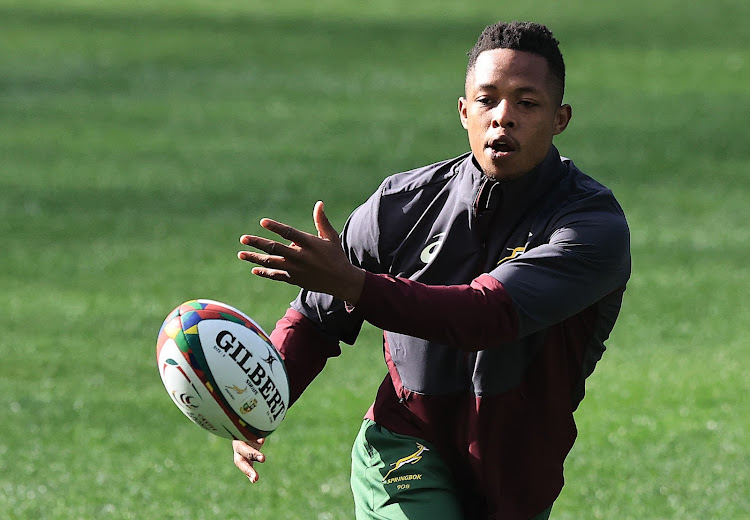 Springbok winger Sbu Nkosi says they have made elaborate plans to counter the physical threat of Argentina when they meet in their Rugby Championship match at the Nelson Mandela Bay Stadium in Gqeberha on Saturday.

The Argentinian Pumas arrived in the Windy City with confidence after a good run of results where they suffered only one defeat in their last seven Test matches since the World Cup.

Argentina claimed the notable scalps of powerhouses New Zealand and Wales during the run, but Nkosi is confident that the Boks will be able to cope with the athleticism and power of their highly unpredictable opponents.

“I must say that they have a good mix of athleticism and power, which is similar to what we also bring to the table. We expect them to confront us physically and the battle you get from Argentina is different to what you get from the British and Irish Lions because of the make-up of their team.

“We expect them to stand their ground, but we have made plans of our own and we need to give them respect because they have slayed a few big giants over the past games they have played. We need to be on point so that we don’t get the short end of the stick.”

Nkosi, who scored a brace of tries on his debut against England in 2018, will play in his 12th match for the senior national side where he will be looking to add to his eight tries and 40 points.

“The excitement of playing for the Boks hasn’t changed. It is exciting for me to be here because there are many people out there who wish to be here, and are not here. The coach explained earlier on that when you are part of the group, each week you have a different responsibility and my responsibility is to prepare the guys.

“It is the responsibility that has changed and I am looking forward to playing against Argentina because they are a very strong outfit, and they deserve all the respect that we can give them. We are preparing with that in mind.”